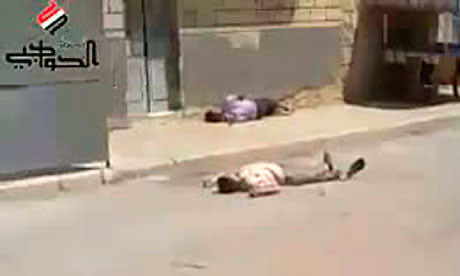 Syria‘s uprising spread into the country’s commercial hub of Aleppo today, where two people died during rare government raids, which also saw at least 13 protesters killed in other towns and cities.

The foray into Aleppo, which remains a stronghold of the regime, came as observers outside Syria began to question whether five months of violence and implacable defiance had now reached a tipping point for Bashar al-Assad and the ruling Ba’ath party.

The mood in the country’s second-largest city has long been considered a key barometer of the regime’s standing inside the country it has ruled with ruthless control for more than four decades.

“If [Aleppo] turns, the Assads have lost Damascus,” said one western official. “It is very important to them. It is the only part of the country where the economy has remained relatively resolute.”

Across the country, security forces today were widely reported to have opened fire near people as they emerged from mosques and public gathering places, in a bid to deny them a chance to organise after weekly prayers.

The Muslim prayer day of Friday has become the most volatile day of each week, since the uprising began in March – and this was no different, with demonstrators turning out in large numbers in many cities.

“In many places they started to shoot and use teargas the moment prayer ended,” said Razan Zeitouneh, a lawyer and activist based in Damascus, from where she monitors the protest movement. “We noticed they used gunfire everywhere, as well as thugs with batons in many places.”

Deir Ezzor, in the north-east of the country, was under siege for a third consecutive day, as were the battered cities of Homs and Hama along the western border with Lebanon. The regime regards all three predominantly Sunni Muslim towns as hostile and continues to claim that foreign-backed extremists inside them are driving ever-escalating violence.

Aleppo is also a largely Sunni city, with a sizeable Christian minority, but its residents are mainly middle-class, with strong links to Turkey and considered to be more invested in the ruling Allawite sect.

“There were protests today in the rural areas but also in at least three central neighbourhoods, which is new,” said one man who lives near the Aleppo district of Sakhour. “The one in Sakhour was 1,000 people at most but there is lots of security in Aleppo so this is a good size.”

“Unrest has been growing in Aleppo during Ramadan because more people are going to prayers and can gather to protest,” said a second activist in Aleppo. “Then the increased violence here and in other cities has made people angrier, too. Opposition is slowly increasing here.”

At least 257 people have been killed nationwide during the past 11 days, which has seen a renewed push by the military to crush anti-regime protests.

Dissent also continues to mount in the international community, which has struggled to counter a regime that shows little sign of withdrawing its military from civilian areas, despite months of increasingly vehement criticism. US secretary of state Hillary Clinton intensified calls for an economic boycott of Syria, urging countries to “get on the right side of history” and stop buying oil from and selling weapons to regime figures.

Russia and China have continued to stand alongside their ally, but the Arab League this week rounded on Damascus and tensions sharply increased with Saudi Arabia and Turkey.

One western official in Beirut said a point of no return for Mr Assad had drawn nearer this week, with the embattled autocrat unable to convince friend or foe that he had a solution for the instability that threatens to end the uncontested four-decade rule of the Assad clan.

During that time, Syria has become entrenched as a strategic key to the region’s fortunes and regional and western observers increasingly fear a drastic increase in volatility throughout the Middle East if Mr Assad were to fall.

“Syria has networks and influence on all of its borders,” said a second diplomat in Beirut. “This is where they have leverage – in uncertainty. As the regime continues down this misguided path, things have a very real risk of going badly for many of its neighbours.”

Nour Ali is the pseudonym of a journalist based in Damascus