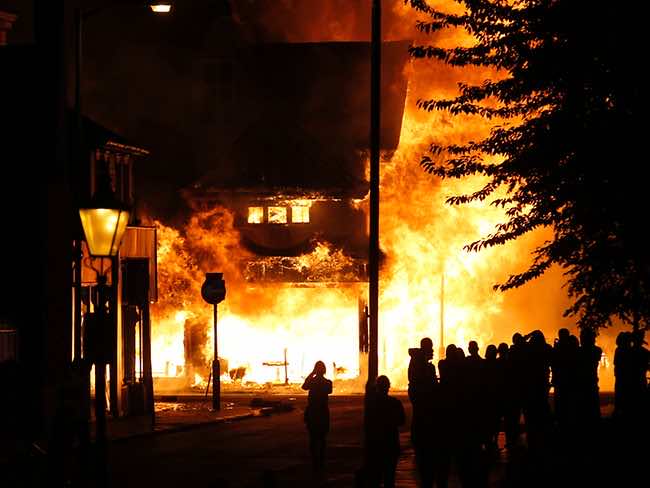 First, I would also like to unequivocally condemn the looting and destruction of our local communities, the acts of violence towards the common citizen and the thuggish opportunism displayed by a fraction of our youth. But what is far more concerning to me is the response of ourselves as adults and parents and the hypocrisy of our government, politicians and the police to recent events.

They would have you believe that the alarming behaviour of our youth has no political agenda, and is solely based on opportunism and thuggery but I will tell you this: the youths are very aware of what’s going on around them, they do care about their bleak realities but will not protest as they have seen that our peaceful protests achieve very little. Society then has taught them that violence is the answer and the government re-enforces those sentiments every day with their international policies.

The youth are so disillusioned with society that they feel that they have no hope and no future, no love and no respect and so, they have turned inwards and formed their own leadership, disregarding those who should be fighting for their interests, yet have failed them so miserably.

We are so quick to condemn these youths but have failed to look at the underlying factors that have induced such a rapid regression.

These youth are not aliens, they are our children! They did not fall from spaceships or suddenly become menaces to society. This was instilled into them by us, and so, we must take responsibility as leaders who don’t lead, teachers that don’t teach, preachers that don’t preach and parents that fail to lead by example.

It is indeed very easy to point the finger, but let’s have a look at things from a teenage perspective:

We call them criminals and they look at the bankers.

We call them violent murderers and they look at the police.

We say they are void of morals and integrity, they look at the politicians and we talk of leading by example and they often look at their parents!

Do we practise what we preach as a society? – No!

Do our children know this?  – Yes!

This is the main reason why there is a disconnect between youth and adult society. Because they know we are hypocrites on every level!

Babies are not born wanting Nike trainers, flat-screens and bling-bling with an alarming aptitude for violence, they are created. It is we who endorse that ‘get what you can, when you can’ mentality. It’s this poisonous western ideology that has taught them this and is now manifest in their mentality and actions.

We need to take off our rose-tinted glasses. Because you are older does not necessarily mean that you are wiser! You are fed an angle of truth, at best 33 percent of it, a portion of the real deal, a fraction of reality that you build your distorted perception of this world and our children on.

The reality is that our children now interact more with machines than they do with human beings.

But just because our youth do not seem to have a political agenda do not think they are numb to politics. They – unlike you – do not watch your synthetic news channels. They get their news from organic sources, utilising the modern technologies available to them.

They see. And their anger burns silently within, growing in intensity until it explodes. The mainstream media and government cannot fool them as they have indeed fooled you.

They knew before you did that Mark Duggan was executed by our police force. They did not digest the mainstream media narrative. They saw the true catalyst for the Tottenham riots which was when a 16 year old girl was set upon by at least seven police officers with truncheons and beaten senseless. Did you?

The key dynamic in all of this is hypocrisy, double standards that permeate to the highest level of our nation’s leadership.

Look at the nerve of these hypocrites! They say:

“Please stop! Robbing and looting is wrong! The random acts of violence are deplorable. Return the stolen goods, they don’t belong to you!”

Well I applaud the sentiment of the statement but are the British Government in any position to play holier than thou and tell anybody anything?

The fact is that the British Empire was built on the robbing, looting and murder of the indigenous peoples of the world. Great Britain, and I use the term loosely, has built her national economy on the proceeds of stolen goods. So why haven’t you given that loot back, Mr Cameron?

When I see this flag waving and the blind patriotic allegiance of some of the British people, I’m very concerned.

And so I say unto you white Britain, the middle class and those of a patriotic disposition: your Great Britain is not that great and indeed it never has been, though I hope some day it will be.

The undeniable fact of the matter is that you have been lied to. Somebody is pulling your strings!

We the black community are not your enemies or the root of the problem. Those of you to the far right, I understand many of your concerns, but please put aside your legitimate reasons for anger and consider this:

Do blacks own poppy field and gun factories? Is it us that take your jobs, raise your taxes and leave you to struggle while the rich and powerful live in luxury?

Is it blacks that neglect your elderly or feed your children poisonous ideals and values?

Is it black people who outsource your jobs to foreign territories and then open up our borders to immigrants who will compromise your right to earn a decent living by working for peanuts?

Who is it that sends your loved ones out to war on the basis of lies spoon fed to you by your mainstream media in the form of a noble agenda to mask their evil intentions?

Do blacks protect the bankers, the rich and the elite? Yet heap the burdens of the city and their transgressions on you, the hardworking citizen through tax and other austerity measures?

Instead of condemning our children, let us teach them better, because we have failed them miserably.

Instead of blindly chastising them let us now lead by example.

Instead of hating them let us show love and understanding.

Instead of demonising them let us educate them and give them hope in a system that appears to have no hope in them, trust in a society that has no trust in them. And support from a government that has turned their backs on them and prepares to slaughter them as we speak, with the full support of the masses.