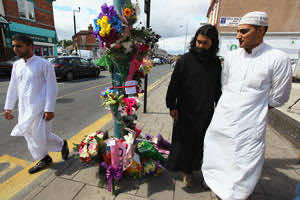 BRITISH Prime Minister David Cameron echoed thoughts of the political establishment and media when he blamed the London rioters as “criminality, pure and simple” and encouraged the use of batons and water cannons. He said parts of Britain weren’t just “broken” but “sick”. He expressed impatience with those civil libertarians who had “phony concerns about human rights” of looters.

He blamed the riots on “gangs” and spoke little of ordinary people’s lives and the bitterness that lay behind the total disregard of life and property as shown by the rioters.

The Muslim HT website stated “the rioters and the bankers have a lot in common, greed and the utter disregard for society.”

Among the first rioters brought to court was a mix of unemployed, university students, a teaching assistant, and a millionaire’s daughter.

The rioters are to quite an extent a product of a society where politicians have been caught stealing thousands of pounds in the expenses fiasco; while at the same time they are behind policies which will take millions of pounds from ordinary people through severe social and economic cutbacks.

What confidence were these rioters inspired with when these same politicians and high-ranking police officers were caught liaising with the criminal activities of Murdoch’s news empire?

John McDonnell, a Labour MP summarized the problem when he said: “MPs and their expenses, bankers and their bonuses, tax evading corporations” had created a “society of looters”.

No one condones the actions of rioters; however when Cameron talks of a “sick” and “broken” society, is he also taking into account that this society was lied to by its “trusted” politicians less than eight years ago and taken into an illegal war to Iraq and later with Afghanistan and Libya which this “broken” society has to pay for through its taxes?

The biggest lie of all which divided society into an “us” and “them” situation, and dehumanized a whole community was the controversial “war on terror”.

The war on terror had detrimental effects and helped further shape this “broken” and “sick” society. It justified discrimination and hatred and the vilification of a whole community. By perpetuating a climate of fear through this so called “war” it paved the way for the introduction of draconian measures and loss of civil liberties for all groups.

The war on terror was set into motion by US President George Bush’s “you are either with us or you are with the terrorist’s” rhetoric after 9/11. Muslim communities had to pay a price for the actions of a few (who, has yet to be verified when a proper investigation is allowed). Tony Farrell, a British intelligence officer, recently was sacked after a 12-year service when he wrote a report that he found no evidence of a Muslim terrorist threat.

Over the years police raid after raid were carried out against ordinary Muslims, many based on little evidence and silly assumptions like how long the man’s beard was or how many times he visited the mosque.

After a decade of demonizing the Muslim community, the rioters learned early on how to stand by and accept the unjust treatment of a community based on their religion; their mere acceptance compromised their humanity.

The media worked in conjunction with the politicians sowing seeds of hatred. The first headlines when the Norway killings happened was that the “terrorist was Al-Qaeda linked”.

Everyday headlines blared out Islamic terrorists planning to bomb and kill Britons. Police vans blared through streets of London looking for Muslims signaling them out in mosques, streets, underground stations and airports.

Cameron’s statement on how the rioters will be dealt with no “phony concerns about human rights” was the same philosophy Tony Blair’s government used when incarcerating Muslims in prisons without access to lawyers.

One also wonders whether the rioters are espousing the same “key British values” which Teresa May, the British home secretary believes Muslims should adhere to. Greed and thuggery?

Is it not strange that according to consecutive governments and media, many terror plots linked to Al-Qaeda have been foiled by the ever-vigilant police? If that is true than wouldn’t it be a logical step for these extremists to take the opportunity of chaos created by riots, when police resources are stretched to limits, to detonate bombs and cause mayhem?

Instead, the “suspect” community not only tried to help the police but also to monitor and protect their and neighbors’ homes and businesses, as seen in Birmingham and Southall West London.

According to initial reports, “Three men mowed down and killed by a hit-and-run driver as they tried to protect their community from looters”.

It was quite unusual that the press and police did not mention that the men who died were Muslims, considering for the past decade after 9/11 when any incident happened the headlines first stated it was Muslims before they stated the incident.

Other initial reports in the media had indicated that communal warfare was breaking out among Turkish groups and the rioters. They did not state the real facts that Muslim Turkish shopkeepers had stood outside their shops armed with bats ready to ward off attempts by looters to rob the shops.

In Whitechapel, Muslims worshippers left evening prayers at the East London Mosque (mosque sited by right-wing think tanks as hot beds of extremism) to help prevent the looting of a bank and businesses nearby.

May be Cameron could learn from the father whose sons were killed protecting their area when he said, “we shouldn’t blame other communities; rather it is time for everyone to work together for peace”.

However, there is growing discontent from many sectors in Britain who have blamed   government policies that has created this breakdown of society.

Many argue that they have set a precedent of lies and fabricated truths through ill judged policies aided and abetted by the media, which has led to youths who have grown up in these troubled times to have no respect or care for life or property. The corruption in the police is also to blame; no credible explanation has been given on many cases involving police brutality and deaths in police custody.

We are living in times where humanity has been taken out of the equation, where greed rules as our politicians have shown us, and discrimination is justified.

Seumas Milne writes in The Guardian: “What we’re now seeing across the cities of England is the reflection of a society run on greed and a poisonous failure of politics and social solidarity. There is now a danger that rioting might feed into ethnic conflict. Meanwhile, the latest phase of the economic crisis lurching back and forth between the United States and Europe risks tipping austerity Britain into slump or prolonged stagnation. We’re starting to see the devastating costs of refusing to change course.”

It wouldn’t be a surprise if the riots will now be used to further tighten state control; Cameron has already promised the introduction of water cannons, batons and a clampdown of the Internet with no considerations given to “phony concerns about human rights”.

His statements reveal that the establishment is not interested in dealing with the root causes of the problem but is gearing up against the growing underclass that is mobilizing into mass protest movements of students, workers and unemployed.