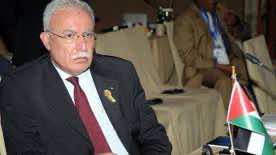 The Palestinians will present their bid for membership of the United Nations on September 20, when Lebanon takes over the presidency of the Security Council, Palestinian Foreign Minister Riyad al-Malki (pictured) said Saturday.

The Palestinians will present their bid for membership of the United Nations on September 20, Palestinian Foreign Minister Riyad al-Malki told AFP on Saturday.

“Palestinian president Mahmud Abbas will personally present the request to UN Secretary General Ban Ki-moon… at the opening of the sixty-sixth session,” on September 20, Malki said.

Abbas “will insist on this historic initiative and Ban Ki-moon will present the request to the Security Council,” he said.

Malki added that the Palestinian Authority chose September because Lebanon, which will hold the presidency of the Security Council, would be in a strong position to push the bid forward.

“Lebanon will hold the presidency of the Security Council in September and this will help us because the president of the council has special prerogatives, which is crucial,” he said.

Following the collapse of direct peace talks with Israel in September last year, the Palestinians have adopted a diplomatic strategy of looking to secure UN recognition for a state along the frontiers which existed before the 1967 Six-Day War.

Israel is adamantly opposed to such a move.