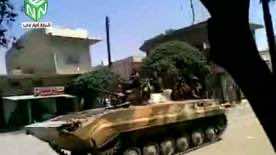 As the gunships blasted waterfront districts, ground troops backed by tanks and security agents stormed several neighborhoods. The sharp crackle of machine-gun fire and loud explosions could be heard across the city.

“We are being targeted from the ground and the sea,” said a resident of the al-Ramel district, which is also home to a Palestinian refugee camp. “The shooting is intense, many homes have been destroyed and the shabiha (thugs) have broken into shops and businesses.”

He said at least three gunboats were taking part in the offensive, and that many people have been killed and wounded. He spoke on condition of anonymity for fear of reprisals.

“We cannot go out, they are raiding and breaking into people’s homes,” he said, citing reports that about a hundred people have been arrested.

The intense operation in Latakia, a key port city once known as a summer tourist draw, is part of a brutal government crackdown on several Syrian cities meant to root out protesters demanding the ouster of President Bashar Assad.

The city has a potentially explosive sectarian mix. Sunnis, which are a majority in Syria, live in Latakia’s urban core, while Assad’s minority Alawite sect, an offshoot of Shiite Islam, populates villages on the city’s outskirts, along with small minorities of Christians, ethnic Turks and other groups.

The crackdown, which has targeted predominantly Sunni areas of the city of more than 600,000, raised concerns of sectarian bloodshed in a country that has already seen an alarming rise in sectarian tensions since the start of the uprising.

On Saturday, at least 20 tanks and armored personnel carriers rolled into the city’s al-Ramel district amid intense gunfire that sent many residents fleeing the area. Activists said at least two people were killed.

The security forces appear to be intent on crushing dissent in the al-Ramel neighborhood, which has seen large anti-Assad protests since the Syrian uprising in mid-March. On Friday, as many as 10,000 people took to the streets there, calling for Assad’s ouster.

After their initial assault on the city Saturday, Syrian security forces pushed back into Latakia again Sunday.

In al-Ramel alone, at least 21 people have died in the shooting, said Rami Abdul-Rahman, head of the London-based Syrian Observatory for Human Rights. The activist network the Local Coordination Committees put the number at 19.

Both groups said gunboats in the Mediterranean are taking part in the offensive, firing heavy machine guns. A large number of people were wounded as a result of the indiscriminate firing on houses, they said.

“They are trying to take control of the city as they did in other places,” said Abdul-Rahman.

Amateur videos posted on the Internet by activists showed at least one gunship patrolling the coast opposite al-Ramel, and tanks rumbling along the waterfront.

The Associated Press could not verify the activists’ accounts or the contents of the videos. Syria has banned most foreign media and restricted local coverage, making it impossible to get independent confirmation of the events on the ground.

The protests calling for the Assad regime’s downfall have grown dramatically over the past five months, driven in part by anger over the government’s bloody crackdown in which rights groups say at least 1,700 civilians have been killed.

The government has justified its crackdown by saying it’s dealing with terrorist gangs and criminals who are fomenting unrest.

The United States stepped up calls for a global trade embargo on oil and gas from Syria, warning even some of America’s closest allies that they must « get on the right side of history » and cut links with a government that uses violence to repress protesters and will not reform.

Secretary of State Hillary Rodham Clinton said international opinion was hardening against Assad, noting a « crescendo of condemnation » from world powers and Syria’s Arab neighbors. But she said tougher action was required, too.

The Dutch Foreign Ministry said Friday the European Union may decide in the next week or two to broaden its sanctions against the Syrian regime and state-run businesses.

Canada also broadened economic sanctions imposed against Syria Saturday by barring additional members of Assad’s government from traveling to Canada and freezing assets of more entities linked to the regime.

Foreign Affairs Minister John Baird admits the current measures imposed by Canada, the U.S. and other countries haven’t worked, but said Canada and its allies are prepared to ramp up the pressure.

The Syrian uprising was inspired by the revolts and calls for reform sweeping the Arab world, and activists and rights groups say most of those killed have been unarmed civilians. An aggressive new military offensive that began with the Muslim holy month of Ramadan at the start of August has killed several hundred people in just one week.