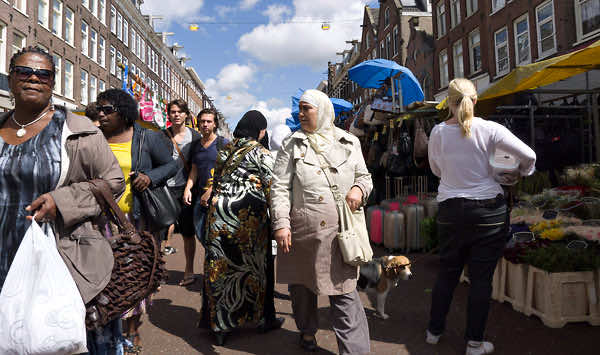 AMSTERDAM — Anders Behring Breivik, the Norwegian who admitted to mass killings last month, was obsessed with Islam and had high praise for the Netherlands, an important test case in the resurgence of the anti-immigrant right in northern Europe.

The sometimes violent European backlash against Islam and its challenge to national values can be said to have started here, in a country born from Europe’s religious wars. After a decade of growing public anger, an aggressively anti-immigrant and anti-Muslim politician, Geert Wilders, leads the third-largest party, which keeps the government in power.

In Slotervaart, a majority immigrant neighborhood in southwestern Amsterdam, Maria Kuhlman and her friends watched Muslim families stroll by on a Ramadan afternoon, some of the men in robes and beards, the women wearing headscarves. A large blond woman shouted, “Go Wilders!”

Mr. Wilders’ Freedom Party, which combines racist language with calls for more social spending, won 15.5 percent of the vote in June 2010. He was recently acquitted of charges of hate speech for comparing the Koran to “Mein Kampf” and calling mosques “palaces of hatred.” He wants all immigrants and their children deported and warns of the supposed Muslim plot to create “Eurabia.” He declined repeated interview requests.

While many Dutch recoil at his language, he touches on real fears. “Sometimes I’m afraid of Islam,” Ms. Kuhlman said. “They’re taking over the neighborhood and they’re very strong. I don’t love Wilders. He’s a pig, but he says what many people think.”

Now, after Norway, the Dutch are taking stock. The killings frightened everyone, said Kathleen Ferrier, a Christian Democrat legislator born in Surinam, who had objected to her party joining a Wilders-supported government. “Norway makes it clear how much Dutch society is living on the edge of its nerves,” she said. “Wilders says hateful things and no one objects. We have freedom of speech, but you also have to be responsible for the effect of your words.”

Taboos about discussing ethnicity and race — founded in shame about delivering Dutch Jews to the Nazis — are long gone.

Ms. Kuhlman has lived in the Slotervaart neighborhood for 36 years but says, “I no longer feel at home.” Built in the 1950s, Slotervaart is now about 60 percent immigrants or their children, most from Morocco or Turkey. Crime rates are high, especially among the second generation.

She remembered sunbathing topless on her balcony in the 1980s. “It’s inconceivable now,” she said. “Now my next-door neighbor doesn’t even greet me in the hallway, he can’t look at me, and it’s been 28 years,” Ms. Kuhlman said.

Then she laughed bitterly. “He doesn’t work; I work. I work all shifts. I pay taxes. I work for them!”

Willem Stuyter, nursing a beer, broke in. “It’s already too late,” he said. “In 10 years this will be a Muslim state.”

Mr. Wilders is the political inheritor of two more flamboyant and intellectual figures — Pim Fortuyn and Theo van Gogh, who both spoke about the dangers of Islam to Dutch civic culture. Both warned of homophobia, anti-Semitism and suppression of women, and both were killed — Mr. Fortuyn in 2002 by an animal-rights activist and Mr. van Gogh in 2004 by a Dutch Muslim who shot him, tried to cut off his head and attached a note to his body with a knife.

The brutal murder of Mr. van Gogh after the attacks of Sept. 11, 2001, was a turning point, giving a focus to social unease and anxiety about immigration, multiculturalism and Muslims.

If part of the Dutch anxiety is about identity, there are similar concerns among Muslims here. There are two parallel sets of identity crises, said Ahmed Marcouch, 42, son of an illiterate Moroccan immigrant and now a Labor member of Parliament. Most Muslims came from poor, less educated parts of Morocco and eastern Turkey, and clung to traditional values and the mosque as bulwarks against a secular society that promoted individualism, gender equality and gay rights.

“They didn’t speak Dutch, they didn’t know Holland, and they saw the sexual revolution, feminism and youth anarchism as a provocation, as part of a decadent society,” Mr. Marcouch said. He remembers his father saying with contempt, “Women are the bosses here.”

Their children, fluent in Dutch but not readily accepted, were even more at risk. A significant number, he concedes, turned to crime. They had their own identity problems, Mr. Marcouch said, asking: “Who am I? Where am I really from? Can I be Dutch?” He described his own son, 22, discussing these questions with his 10-year-old sister. “They won’t recognize you as a full citizen,” his son told her.

At the same time, Mr. Marcouch said, Dutch politicians were promoting economic integration — language training, job training. “They didn’t understand the importance of religious identity among the immigrants,” he said. They dismissed it as backward even as they failed to understand the anger a growing immigrant population was creating. “The fear,” he said, “is on both sides.”

Some, like Rob Riemen, director of the Nexus Institute, a research organization, think that Mr. Wilders represents a new fascism, using Islam as the scapegoat for every ill. “Wilders was a key source of inspiration for Breivik,” Mr. Riemen said. “But the Dutch don’t want to acknowledge that we see fascism in the face of Wilders. To call him a populist is to disguise what is really going on.”

Social democracy has lost its way and become too tied to materialism and the market, Mr. Riemen said. “And history teaches us that fascism pops up when social democracy loses its compass.”

But others argue that analogies to fascism overstate the weakness of Dutch society and the appeal of the far right. Paul Nieuwenburg of Leiden University says that many issues are jumbled together in the growing revulsion against immigration: fear of “Islam,” as if it were monolithic; of terrorism; of globalization; of joblessness; of the growing influence of European Union bureaucrats in Brussels; of austerity; of the perils to the euro and the Dutch budget of Greek, Portuguese, Irish, Spanish and now Italian debt; of juvenile criminality, especially among youth from Morocco and the Antilles.

“There is a growing protest vote,” Mr. Nieuwenburg said. “People feel let down by the traditional parties.” And the traditional parties, reacting to the rise of Wilders, have all fled from the language of multiculturalism. “The taboos are gone, and now you’re suspect if you say anything positive about multiculturalism,” said Henk Overbeek, a political scientist at VU University.

The Labor Party thought it would win the 2010 elections by fielding Job Cohen, a former mayor of Amsterdam who was a champion of multiculturalism. Mr. Cohen now takes a less accommodating tone, speaking of the problems of immigration, dislocation and juvenile crime to the native population. “They feel they have moved without moving,” he said. “They live in the same house as 30 years ago, but the environment has changed.”

Mr. Cohen calls the government’s reliance on Mr. Wilders “the worst possible solution, because it gives him a lot of influence without responsibility.”

But Eddie Dekker, 38, who works for a delivery company, thinks that Mr. Wilders is doing just fine. “He’s saying what many people think and don’t want to say,” Mr. Dekker said. “I don’t agree with everything, but 70 percent of what he says is what I’ve thought for the last 20 years.”

Muslims in Europe are not going to leave, Mr. Marcouch said. Pointing to the Arab Spring, he said: “Muslims need to reach out to the others and say, ‘Freedom is our common value, and we must all fight for it and defend it.’ ”

In the United States, citizenship once granted is never questioned, said Mr. Overbeek of VU University. “But in Europe it’s never quite established, no matter how long you’ve been here. Here it’s still, ‘When did you get here, and when are you going back?’ ”

East of Amsterdam, in Almere, the youngest city in the Netherlands, 30 percent voted for Mr. Wilders.

Shopping in the city center, Raihsa Sahinoer, 24, born here of Surinamese immigrants, was not surprised. “Wilders says we all have to go back even if we were born here,” she said. “It’s not only about Muslims, it’s about colored people, too.”

She lives as the Dutch do, she said. “But they tell us if you’re colored, you’re not Dutch.” Does she feel Dutch? “No,” she said, then paused, then asked: “What is Dutch?