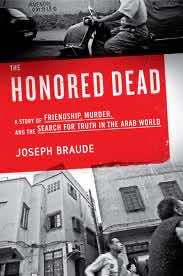 Joseph Braude’s new book, “The Honored Dead,” looks at the changes roiling the Arab world through the author’s four months spent in a Casablanca police precinct. He eventually launches his own investigation into a seemingly routine murder.

‘The Honored Dead: A Story of Friendship, Murder and the Search for Truth in the Arab World’

At the core of journalist Joseph Braude’s new book about a murder investigation in the fabled North Africa city of Casablanca is a mystery — not only of how and why the murder was committed, but about the profound enigma of what lies in the human heart.

As a way to better understand modern Morocco and the Arab world, the author of “The Honored Dead” has arranged to embed himself for four months with a unit of the judiciary police (roughly equivalent to the American FBI). These officers detain suspects, question witnesses, and investigate crimes, including murders and terrorist violence. “For the past few years I have been interested in the intersection of authoritarian states and the masses they patrol,” Braude writes. “The most poignant site of that intersection is a police precinct.” He is given wide access and surprisingly few conditions or restrictions.

Braude is uniquely qualified for this assignment. Born into an Iraqi Jewish family, he is fluent in several languages, including Arabic and Hebrew, and once worked for the FBI as a translator in anti-terrorism cases.

In the post-9/11 world, Morocco has become a regional center of terrorists and drug dealers. On May 16, 2003, an offshoot of Al-Qaeda committed a series of suicide bombings in Casablanca that killed 45 and wounded hundreds of others. The attack, the worst in the country’s history, prompted a massive security crackdown and increase in intelligence gathering.

The Casablanca precinct where Braude is embedded is in one of the city’s largest slums, rife with poverty and crime. To delve even deeper into this world, he requests details about a recent murder case. He believes that researching the life and death of an ordinary individual will help tell the larger story of people and nation.

A man named Ibrahim Dey was beaten to death in a warehouse where he had been squatting. The killer has confessed to the crime and police present the case as routine and resolved, but as Braude goes through police files, and interviews officers and witnesses, he begins to have his doubts. Spurred on by the victim’s best friend, Muhammad Bari, he decides to launch his own investigation.

Bari accompanies Braude to the victim’s hometown, and introduces him to family members, friends and acquaintances to learn more about Dey. His queries eventually lead to a shocking revelation that throws previous evidence into question. The investigation also exposes him to lesser-known facets of Moroccan society — black magic, homosexuality and the remarkable cultural diversity of its people, made up of Arabs, Berbers and minority Jews, among others.

Braude’s writing is appealingly cinematic, moving from street-level close-ups to wide-angle panoramas of city and society. He builds a framework of vivid characters and locations and weaves in big-picture background on history, culture and government. He also glides naturally in and out of the narrative at hand into personal reminiscence, waxing nostalgic, for instance, about his mother’s memories of pre-Saddam Baghdad.

Perhaps most fascinating is how this perceptive writer peels away the many layers of complexity in his story, only to uncover deeper, more confounding mysteries — which smacks, in the end, of the truth.