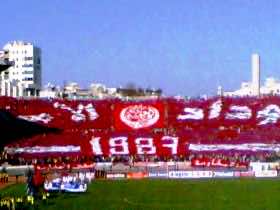 The two top teams in Group B of the Caf Champions League, Wydad of Morocco and Esperance from Tunisia, will battle for supremacy Sunday at the Stade Mohamed V in Casablanca.

Both teams are tied on four points each but Wydad Athletic Club enjoy a far better goals difference.

This game has taken greater importance after Al Ahly of Egypt turned back MC Alger of Algeria 2-0 in Cairo in the other match in this group on Friday.

Ahly have now recorded four points, like Wydad and Esperance, and the race for the top two spots in this mini-league stage of the competition may well go down the wire.

Esperance coach Nabil Maaloul will be without midfielder Majdi Traoui, who is suspended, and the team are still awaiting the arrival of Cameroon youth international defender Yaya Banana from the Fifa U20 World Cup in Colombia.

Skipper Oussama Darragi was also involved in a car accident and it is not known whether he will be fit for this clash.

However, the Tunis-based outfit welcome back Khaled Korbi and Youssef Msakni, who missed the 1-0 home win over Al Ahly.

Tunisian clubs Esperance and Club Africain are locked in dispute over who has the right over Coulibaly, who previously was with Libyan club Ahly Tripoli.

World football governing body Fifa have now given the defender a provisional clearance to feature for Esperance.

Wydad are so far making the most of a boardroom decision to disqualify defending champions TP Mazembe from this year’s competition for using an ineligible player.

The Moroccan club pipped Mazembe 1-0 at home only to lose 2-0 in the return leg.