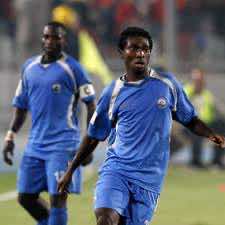 A fine first half performance by two time African champions, Enyimba of Nigeria was enough to give them a 2-0 victory over Moroccan club, Raja Casablanca in Aba on Sunday.

Enyimba was without star midfielder; Josiah Maduabuchi, winger: David Tyavkase and left back Valentine Nwabili but the Nigerians started the brighter with their traditional one touch passing and quick movement.

It was no surprise when impressive forward, Uche Kalu opened the scoring on 9 minutes with a fine curling effort that laft the Raja keeper, Yassine El Had with little chance.

The home side continued to dominate and further stretched their lead when captain, Chiedozie Johnson smashed home from the edge of the box.

Raja improved considerably after the break but failed to find the breakthrough. Kouko Guelhi, Ismael Benlamalen and Bouachaib El Moubaracki were the more impressive players for the visitors. They all had good chances which were spurned in the second period.

“We were outplayed. Enyimba were better than us and deserved to win,’ Caoch of Raja Lilie Balaci told SuperSport.com afterwards while Coach of Enyimba, Evans Ogenyi explained that Raja were forced to play an alien game.

‘We forced them to play our own style. The early goal (by Uche Kalu) helped as they were forced to come out and jettison their counterattacking style,” he said.

Enyimba stay top o Group A with 7 points from 3 matches while Raja stay bottom with a solitary point from 3 games.