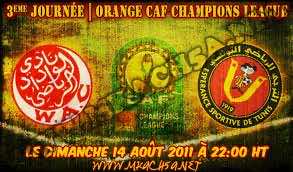 Last year’s beaten finalists Esperance were forced to a 2-2 draw by hosts Wydad Casablanca in a Caf Champions League Group B face-off Sunday.

Wydad remain top of this group with five points from three matches, same with Esperance of Tunisia.

Al Ahly of Egypt are third in the standings with four points, while MC Alger of Algeria remain rooted to the basement of the group with a point after they lost 2-0 to Ahly in Cairo.

Wydad were expected to fire past Esperance, but instead it was the Tunisian champions who fell went in front with two goals within 36 minutes.

Wajdi Bouazzi opened scoring after 28 minutes, before Walid Hicheri extended the lead in the 36th minute.

However, Wydad rose from the dead in the second 45 minutes.

First, Fabrice Nguessi Ondama was on target after 65 minutes to pull back a goal.

Youssef Kaddioui made the comeback complete on 75 minutes with a penalty goal.

Esperance and Wydad will again clash in a fortnight in Tunis.