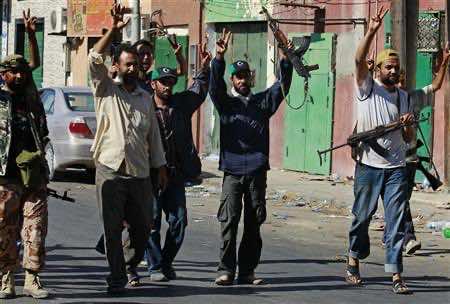 Muammar Gaddafi urged Libyans on Monday to free the country from “traitors”, as rebels in the west began to strangle a major lifeline to his capital.

His broadcast appeal was made over a bad telephone line from an undisclosed location. In the following hours, a senior figure in his government showed up in Cairo with his family.

He told officials he was on holiday and there was no immediate comment from Tripoli on his move to Egypt.

Unnamed envoys of Gaddafi’s government were reported to have held talks with rebels at a Djerba hotel on Sunday, on a possible resolution of the 6-month-old civil war.

A dramatic advance on Saturday won rebels control of the town of Zawiyah, 50 km (30 miles) west of Tripoli on the coast, enabling them to halt food and fuel supplies from Tunisia.

Tripoli was under no immediate threat, but rebels are now in their strongest position since the uprising against 41 years of Gaddafi rule began in February.

“The fall of Zawiyah would be the biggest milestone for the rebels since the liberation of Misrata. It’s a real morale booster for them and implies a sense of momentum,” said analyst Shashank Joshi of the Royal United Services Institute in London.

“It is home to the regime’s only functioning oil refinery,” he added. But rebels say said Gaddafi’s forces still controlled the Zawiyah oil refinery, which lies on the coast.

A rebel spokesman called Abdulrahman told Reuters by telephone that the Western Mountains town of Garyan about 75 km (45 miles) south of Tripoli, had also been taken.

“Garyan is fully in the hands of the revolutionaries. They crushed the Sahban Brigade, the main command centre for Gaddafi in the Western Mountains. They took the brigade’s heavy and light weapons,” he said.

“Gaddafi has been isolated. He has been cut off from the outside world after the revolutionaries managed to cut road linking Tripoli to Tunisia. The revolutionaries last night seized three Tripoli-bound vehicles full of foodstuffs.”

British Prime Minister David Cameron, a leading figure in the anti-Gaddafi coalition, said via a spokesman that “we think the NATO operation is proving successful in eroding Gaddafi’s ability to wage war against his own people”.

The rebels have help from NATO warplanes which are bombing Gaddafi’s army under a U.N. mandate to protect civilians.

Medics outside Zawiyah on Monday said sniper and mortar fire by Gaddafi forces killed three civilians. One man was shot in the head and a 15-year-old girl died of shrapnel wounds.

Waleed, brother of a wounded woman, said Gaddafi forces were “shooting at us indiscriminately”.

A doctor said Zawiyah teaching hospital, with 600 beds, had been taken over by the military and turned into huge weapons storage area, particularly the floor under the maternity ward.

Libyans fleeing south in their cars reported gunfire in a place called Harsha, between Tripoli and Zawiyah.

“I heard fighting there today on our way here,” said one man who declined to give his name. He also said rebels clashed with Gaddafi’s security forces inside Tripoli on Sunday night.

“There is no gasoline, no electricity, food prices are up 300 percent. We just cannot live like this anymore,” he said.

Gaddafi’s latest speech early was delivered over a poor quality telephone and broadcast by state TV in audio only.

“The Libyan people will remain and the Fateh revolution (in which he seized power in 1969) will remain. Move forward, challenge, pick up your weapons, go to the fight for liberating Libya inch by inch from the traitors and from NATO.”

“The blood of martyrs is fuel for the battle,” said the 69-year-old leader. “The end of colonialism is near. The end of the rats (rebels) is near, as they flee…”

In Zawiyah, rebel fighter Khalid Al-Zawi said: “Gaddafi is crazy. He’s capable of absolutely anything. That’s one thing we have to keep in mind.”

On Tunisia’s resort island Djerba on Sunday, security men turned Reuters away from a hotel where a source, who spoke on condition of anonymity, said talks between rebel and government representatives were being held. ID:nLDE77D089]

In Tripoli, government spokesman Moussa Ibrahim blamed denied this report as “part of a media war against us”.

“The leader is here in Libya, fighting for the freedom of our nation. He will not leave Libya,” Ibrahim said.