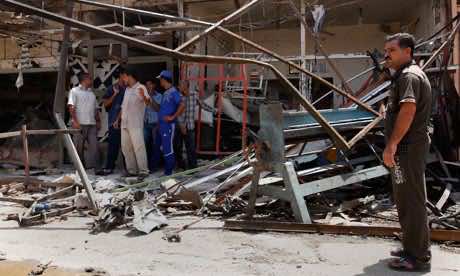 A series of co-ordinated explosions have killed at least 74 people and wounded 250 more across Iraq, shattering calm during the Muslim holy month of Ramadan and showing that extremists remain a threat more than eight years after the fall of Baghdad.

The bombs were detonated in largely Shia Muslim areas of the country. Casualties were mostly Shia-led security forces. A Sunni extremist group, the al-Qaida-affiliated Islamic State of Iraq, was blamed.

A jihadist site praised the attacks and said they targeted “Shi’ites, Christians and the apostate awakening councils”, in reference to the US-backed Sunni groups who turned on al-Qaida in 2007.

In total, 13 bombs exploded. Many were apparently detonated by suicide bombers. If so, this would further undermine Iraqi and US military claims that al-Qaida and its Iraqi jihadist groups are a spent force after almost a decade of war.

The deadliest blast was in the south-eastern city of Kut, where 37 people were killed by a roadside bomb and then a car bomb, which detonated as bystanders gathered following the first explosion.

In the Shia shrine cities of Kerbala and Najaf up to 11 security officers and members of the public were killed by car bombs. Bombs rocked Baquba, Tikrit and Kirkuk and there were at least six explosions in Baghdad, although only three people were killed in the capital.

The ease with which car bombs were moved around Iraq is a further blow to the standing of Iraq’s security forces, who insist they have contained sectarian violence and have Sunni and Shia extremist groups under control.

An attack on a similar scale took place during Ramadan last year and Iraq’s dwindling Christian community was subsequently targeted in churches and in their homes. This spring more than 50 people were killed in an attack on the Tikrit governor’s office. Targeted assassinations have been common in Baghdad, Baquba and Kirkuk.

Despite monthly death tolls now sharply below those during the sectarian war of 2006-07, spasms of large-scale violence still occur quite frequently in Iraq, a fact that convinced some local politicians to ask departing US forces to remain after the mandated end of their mission in December this year.

The US military is prepared to consider an unspecified number of troops staying on in Iraq as trainers but with roles that would likely have a broader mandate. US advisers are wary of the fragile security gains in Iraq unwinding when they leave. This would be a bitter setback after the more than 4,000 lives lost and estimated $500bn spent fighting a war that aimed to reshape Iraq as a pluralist democracy.

Whether US troops stay or go is unlikely to be decided until at least November, with many MPs appearing to fear the future without the safety blanket of well-armed and better-trained soldiers on call for any crisis.

However, Shia extremist groups, including the Sadrist party, which has 39 seats in Iraq’s 325-seat parliament, have vowed to violently oppose any troop extension. Militias killed at least 12 US soldiers in June in a series of rocket and roadside bomb attacks widely interpreted as an attempt to create the impression that troops were being forced to flee.