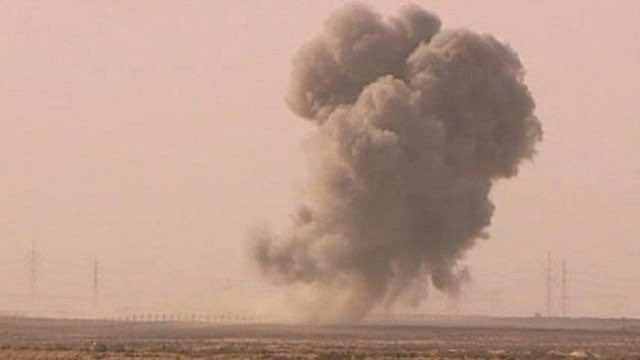 Forces loyal to Muammar Gaddafi will destroy the oil terminal in Brega to prevent one of the country’s most important economic lifelines falling into the hands of advancing rebels, the fighters said on Monday.

The oil port of Brega has been the main front line in the east of the country for months. Rebels have seized the port’s eastern residential areas since last week, but Gaddafi’s forces still control its oil terminal, refinery and port.

Black smoke billowed over those areas on Monday, which the rebels said was a sign that Gaddafi’s forces were already carrying out sabotage.

“We could be making $35 million a day from Brega port in exports of oil,” the rebels’ military spokesman, Ahmed Bani, told Reuters during a visit by reporters to the battle-scarred section of the town the rebels hold.

“Because of that, Gaddafi will destroy it. Scorched earth. We know his mentality,” Bani said.

Rebels believe Gaddafi’s forces sabotaged two large oil tanks over the weekend, which were sending up the clouds of smoke. Bani said he believed the refinery was intact but troops were planning to destroy it rather than let it be captured.

“It’s not only us Libyans who will lose. Refiners in Europe are using our oil,” Bani said.

It was not possible to independently confirm reports of damage being done to oil installations, an accusation rebels have previously levelled at government forces.

In April, rebels said Gaddafi’s troops attacked a pumping station between the eastern Sarir oil field and a Mediterranean port, as well as the Ramla oil field.

A senior rebel oil official said in the same month that the Misla oil field had been damaged by government forces, part of a strategy to prevent anti-Gaddafi forces using oil revenues to fund their rebellion.

Gaddafi’s government has denied attacking any oil facilities and has either blamed the rebels or NATO airstrikes for damage.

Advances in the east of the country in recent weeks have been slower than in the west, where rebels said on Monday they had completed the encirclement of the capital by seizing two towns near Tripoli in as many days.

Capturing Brega would be a coup for the rebels, who long to restart the oil exports that accounted for nearly all of Libya’s wealth before an uprising six months ago and sanctions on Gaddafi brought shipments to a halt.

OPEC member Libya is the third-largest oil producer in Africa and holds the continent’s largest crude oil reserves. It produced 1.6 million barrels of oil a day before the uprising against Gaddafi’s 41-year-rule erupted in February.

The town, which is spread out over about 15 km (10 miles) along the Mediterranean coast about 750 km east of Tripoli, has changed hands several times in back-and-forth fighting.

Several rebel tanks on a hill to the east of the town were firing on Monday at Gaddafi’s forces in the west. Gaddafi troops were firing back with artillery. NATO jets flew high overhead but did not strike.

Brega’s residential neighbourhood, known as New Brega, is a neatly laid-out company town of comfortable concrete houses with small yards in front. But it has taken a beating.

Residents have fled and many of their houses have been ransacked — by Gaddafi’s men, the rebels say, although this could not be verified.

Clothes, blankets and mattresses were strewn about. In one house, a row of glasses was neatly stacked on a shelf while below, smashed furniture and broken bits and pieces carpeted the floor.

Some of the town’s walls were pocked with bullets, some blasted through, while others had pro-Gaddafi slogans scrawled across them. One promised sacrifice in his defence.

Unexploded ordnance lay on some streets along with burnt out vehicles, an occasional dead sheep, the odd piece of furniture and countless empty plastic water bottles.

The rebels say Gaddafi’s forces laid many landmines, perhaps as many as 3,000, along the eastern and northern edges of the town, and they fear mines have also been laid around the oil terminal.

Rebel Sami Abdul Gardah, manning a town checkpoint with a belt of ammunition across his chest, said Gaddafi’s forces had fired truck-mounted missiles into the oil tanks two days ago setting them ablaze.

“Gaddafi did it. We didn’t do it, that’s money,” he said with a nod at the oily smoke in the distance, drifting south across the desert on a breeze off the sea.