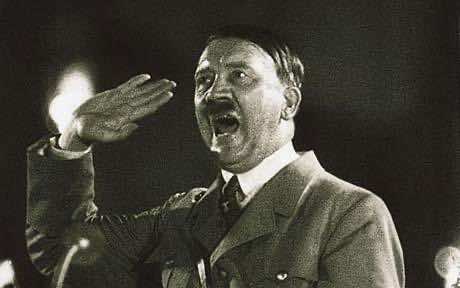 Some tried bombs to neutralize the fuhrer, others tried bullets. All failed.

Now it has come to light that British spies looked at an even more audacious way of derailing the man behind the German war machine – by giving him female sex hormones.

Agents planned to smuggle doses of oestrogen into his food to make him less aggressive and more like his docile younger sister Paula, who worked as a secretary.

Spies working for the British were close enough to Hitler to have access to his food, said Professor Brian Ford, who discovered the plot.

He explained that oestrogen was chosen because it was tasteless and would have a slow and subtle effect, meaning it would pass Hitler’s food testers unnoticed.

Speaking about the scheme, Prof Ford, a science writer and fellow of Cardiff University, said: “There was an Allied plan that they would smuggle oestrogen into Hitler’s food and change his sex so he would become more feminine and less aggressive.

“Their research had showed the importance of sex hormones – they were beginning to be used in sex therapy in London.”

He went on: “There were agents who would be able to get it into his food – it would have been entirely possible.”

Because Hitler had tasters, Prof Ford said there was “no mileage to putting poison in his food because they would immediately fall victim to it.”

But he went on: “Sex hormones were a different matter.”

Paula Hitler was the only one of Adolf’s full siblings to survive to adulthood. She worked as secretary in Vienna in the 1920s, and received financial support from her brother until his suicide in 1945.

After the war she was interrogated by American agents but released, and lived a secluded life until her death in 1960.

The oestrogen plan is outlined in a new book Prof Ford has written called Secret Weapons: Technology, Science And The Race To Win World War II.

He said the idea was just one of many strange attempts to bring a swifter end to the war.

Other possibilities included dropping glue on Nazi troops in an attempt to stick them to the ground and disguising bombs in tins of fruit being imported to Germany.

However, he said a plan for a giant water-borne Catherine wheel full of explosives – dubbed the Great Panjandrum – for an assault on the Normandy coast was the oddest of the lot.

“The nuttiest one was the Panjandrum – an enormous wheel full of explosives with rockets strapped to the wheel,” he told Wales on Sunday.

“It couldn’t have worked yet they spent what, in modern parlance £1 million on the idea, testing it over the waters of Cardiff and Western Super Mare.”

Developed in top secret, it was nonetheless paraded on the waterfront at Westward Ho! in north Devon.

Prof Ford unearthed details of the hare-brained schemes by lookng through stacks of recently declassified files.

Despite chronicling the war’s more outlandish schemes, the book, published next month, also looks at how competition between the powers spurred on technology.