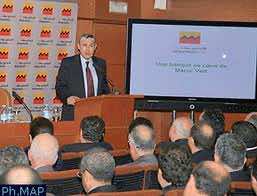 CASABLANCA, Morocco — Morocco’s biggest lender, AttijariWafa Bank SA (ATW.CS: Quote), expects its net profit to rise by a further 15 percent by the end of the year after seeing a similar rise in the first half of 2011, its CEO said on Monday.

“The plan is to have the same performance in the second half,” CEO Mohamed Kettani told a news conference attended by reporters and market analysts in Casablanca.

The bank announced a 15.2 percent rise in its net profit over the first half of the year on Friday.

Kettani also said the bank will dedicate greater effort towards developing the network of its Wafacash subsidiary — aimed at finding customers among the large pool of low-income Moroccans — than towards its conventional banking network.

The drive comes amid an unprecedented shortage of liquidity worsened by a higher trade deficit and a surge in mortgage lending over the past few years.

“Wafacash is really the low-budget bank,” Kettani said. He did not give further figures.

AttijariWafa and its affiliates, active in insurance and consumer credit, have over 1,600 branches in Morocco. A dozen Moroccan banks compete in a market where penetration barely reaches 40 percent. (Reporting by Souhail Karam