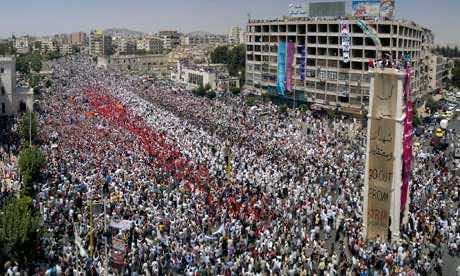 Even the most optimistic of observers couldn’t have imagined such a closing scene for the Syrian regime. The popular uprising there is glowing with determination and enthusiasm, as internal support grows alongside international approval and blessing. Even the staunchest followers and allies of the Syrian regime couldn’t have conceived such fragility and stupidity on its part, but this is how events have developed. Everything happening now is the natural outcome of an accumulative sequence upon which this regime was founded.

Bashar Al Assad tried with all means possible to convince the world and the Syrian people that he was the one and only option for reform. Yet even Bashar himself was not truly convinced of this claim. He appeared before his people delivering a series of speeches which were more like academic lectures. The man refused to accept responsibility for the crimes and failures which have occurred over a stretch of four decades of despotic rule, and refused to have them blamed on his late father, his party, or his government, as if what has occurred in Syria was the result of some extraterrestrial invasion.

The Syrian regime was never, at any point in its history, honest, clear and capable of confronting its problems. It has always acted with cowardice and deception when dealing with the issues facing it. It was always good at offering scapegoats who would take the rap for any failure or public anger. The regime would offer them as a form of temporary anesthetic to absorb the popular resentment, as happened with Refaat al-Assad, Ghazi Kanaan, Mahmud al-Zu’bi, Abdul Halim Khadam and Ali Habib, among other familiar names.

All methods of suppression and killing have failed. All means of atrocious terrorization employed by the Syrian army against its own people have proved unsuccessful, including running them over with tanks, dragging their mutilated bodies along, murdering children, torching hospitals and demolishing mosques, not to mention other savage ways of repression.

Yet something strange happened Friday before last, known as “God with us” Friday. The revolution started moving in a qualitative manner. Official statements were issued by several governments, taking a clear and firm position against the regime whilst siding with the revolution. They explicitly called for a peaceful transition of power. No one is asking the regime to bring about reforms anymore. The international community now realizes that those who have destroyed the country are incapable of rebuilding it, and that those who have lied cannot be trusted. Even the closest and strongest allies of this bloodthirsty regime have maintained complete silence on account of its horrific crimes.

Now there is talk about when Bashar al-Assad will go, and how. Will he flee the country along with his ruling gang? Will he be assassinated? Will the army turn against the regime? Will Assad be arrested or not?

This bloodthirsty criminal regime has surrounded the family residences of two venerable clerics, namely Mohammed Said Ramadan al-Bouti and the Mufti Ahmad al-Hassoun. The regime is threatening to kill members of both households if either cleric utters a word against the regime, which is aware of their popularity in the street. But there are other clerics in Syria who publicly disowned this cowardly regime which has never been honest or candid. It is only a matter of time before the regime collapses. This explains the frenzied nervousness within its ranks, its savage indiscriminate killing, and its slogans emblazoned on walls. The walls of Hama’s mosques have been stained with phrases like “There is no god except Bashar and Maher is his messenger” and “al-Assad or no one”.

This is the mentality governing Syria today. But al-Assad is a ruler whose time is up, a ruler who has lost all credibility, all respect, and all humanity. His departure has become inevitable and his absence would be hardly mourned by anyone with a responsible humanistic sense, a vigilant conscience, and religious restraint. We are reading the last chapter of the story of a cowardly regime, and I believe it will have a happy and blessed ending for the Syrian revolution and the entire world.