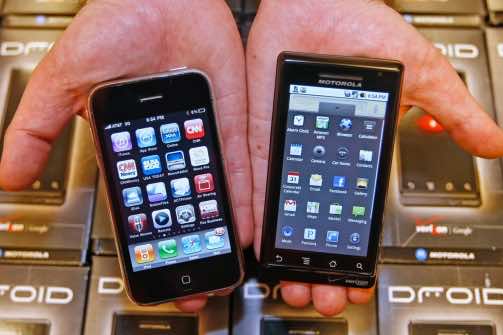 Why pay $12.5 billion for smart phone maker Motorola Mobility? To save off Apple and Microsoft’s patent wars- and stake a claim on the booming wireless market.

Did Google just sandbag its rivals in the smartphone market?

Last month the search giant seemed doomed after Apple and Microsoft teamed up to buy a batch of mobile-phone patents from Nortel for $4.5 billion. Google competed in the auction, but made crazy bids—the distance of the earth from the sun, the number pi in billions of dollars—and then abruptly pulled out at the end, apparently losing interest. Its official explanation was that the price was too high.

But now it seems possible that Google never wanted the Nortel patents to begin with—and just hoped to drive up the price and force its rivals to overpay.

That scenario is more plausible than ever Monday morning, with Google announcing it will spend $12.5 billion to acquire Motorola Mobility, whose treasure trove of mobile-phone patents could protect Google’s Android smartphone platform from growing attacks by Apple and Microsoft.

The deal brings Google nearly three times as many patents as Apple and Microsoft picked up from Nortel.

Google execs positioned the deal as a direct response to Apple and Microsoft, which have been using intellectual-property lawsuits to stymie the rocketing growth of Android.

But what if Google knew all along that it wanted to acquire Motorola? What better way to ensure that this acquisition would be approved than to first “lose” on the Nortel deal and paint itself as the victim of what Google CEO Larry Page this morning called “anticompetitive threats” from Apple, Microsoft, and others?

Whatever went on behind the scenes, one thing is clear: The war over the future of the mobile-phone market is ratcheting up in a big way. And Google has made it clear that it will pay any price to stay on top.

Buying Motorola gives Google a huge buttress against its rivals. Instead of having to pay royalties to Apple and Microsoft for infringing on their patents, Google can use the Motorola patents to settle those claims by striking cross-licensing deals.

As Page pointed out in a blog post announcing the deal, “Motorola has a history of over 80 years of innovation in communications technology and products, and in the development of intellectual property,” and its accomplishments “include the introduction of the world’s first portable cell phone nearly 30 years ago.”

In July, Apple and Microsoft teamed up with four other companies to pay $4.5 billion for a package of 6,000 Nortel patents that were up for auction. Previously, Microsoft and Apple teamed up to buy 882 patents from Novell.

But on today’s call, Motorola Mobility CEO Sanjay Jha said Motorola holds more than 17,000 patents related to mobile phones and has 7,500 more patents pending. It’s like the old line from The Untouchables: “He pulls a knife, you pull a gun.”

In recent months Apple, which views the rise of Android as a threat to its iPhone franchise, has stepped up its legal attacks against Google partners, with lawsuits against HTC, Motorola, and Samsung.

Oracle, meanwhile, has sued Google, claiming Android infringes on the Java programming language, which Oracle got in the acquisition of Sun Microsystems.

Microsoft, too, has been shaking down Android handset makers, demanding royalties on every phone they sell.

Those moves prompted David Drummond, Google’s chief legal officer, to complain on Google’s blog that the company was facing “a hostile, organized campaign against Android by Microsoft, Oracle, Apple and other companies, waged through bogus patents.”

On today’s call, Drummond sounded more hopeful, saying, “We believe we are in a very good position to protect the Android ecosystem for all of our partners.”

The Motorola deal raises issues for Android licensees like HTC and Samsung, which now will be relying on Google for a crucial piece of software but also competing against Google-owned Motorola in the handset market. Google insists, however, that it will operate Motorola as a separate entity and that Motorola will not have advantages over other handset makers.

Google also provided a set of comments from Android hardware partners praising the deal, including this one from Peter Chou, CEO of HTC: “We welcome the news of today‘s acquisition, which demonstrates that Google is deeply committed to defending Android, its partners, and the entire ecosystem.”

Indeed, whatever risk there may be that Motorola will get an edge on developing new handsets may be more than offset by the fact that HTC and others now get the benefit of Motorola’s IP portfolio, with Google picking up the tab.

Why are Google, Apple, and Microsoft are spending so much money and fighting so intensely over this market? Smartphones represent the biggest wave in the history of computing, bigger even than the personal computer was 30 years ago.

By 2013 there will be a billion smartphones in the world, about the same number of PCs that exist today, three decades after the PC was introduced.

Worldwide, there are about 5 billion mobile phones in the world today, out of a population of 7 billion, and while most of those 5 billion phones are low-end “feature phones,” over the next decade most of them will be upgraded to what we today would consider a smartphone.

This means most of the world’s population will have cheap, constant connection to the Internet. Whoever rules that market will reap unprecedented profits.

For a while Apple seemed poised to dominate this new market after introducing the first iPhone in 2007. But then Android came along. Over the past 18 months the Google platform has been booming. On today’s call, Google claimed it is now activating 560,000 Android devices every day, thanks to the fact that 39 different handset makers are selling Android phones.

What do Google’s rivals have to say about Google’s latest maneuver? Apple did not immediately respond to an inquiry. A Microsoft spokesman said the company had not yet prepared a comment on the deal.

Perhaps they are both a little bit stunned. Or perhaps they are plotting their next moves. The signal from Google is clear—the price of staying in this market just got a lot higher.