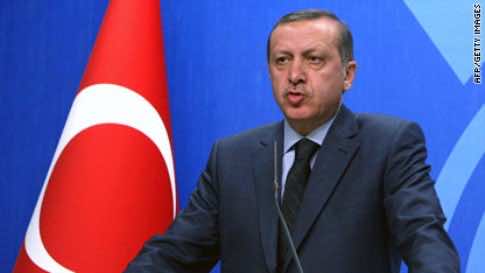 A summit of Islamic countries on the famine in Somalia on Wednesday will give host Turkey a chance to display Islamic piety and flex its diplomatic muscle in Africa at a time other emerging powers are also scrambling for trade and investment in the resource-rich continent.

A day after foreign ministers from the 57-nation Organisation of the Islamic Conference (OIC) convene in Istanbul for an emergency meeting, Turkish Prime Minister Tayyip Erdogan travels to Somalia itself on Thursday along with his family, where he plans to visit relief camps to draw international attention to the East African country’s plight.

Accompanying Erdogan to Somalia will be Foreign Minister Ahmet Davutoglu, who will also take his family and who later heads to South Africa and Ethiopia as part of an African tour.

Muslim Turkey, a rising political and economic power that straddles East and West, is far behind other emerging powers such as China, Brazil or India in the race for new markets in Africa.

But under Erdogan’s ruling AK Party government, Turkey has expanded commercial ties in Africa, as well as in the Middle East and Asia, and opened several new embassies in Africa.

“There is a scramble for Africa now, particularly with China, and Turkey does not want to be left behind,” said Semih Idiz, a foreign affairs analyst who writes for Turkish media.

“Turkey is flexing its muscle in Africa. It wants to show it is a rich country that can reach out to poor countries. Ramadan is a good period to show you are a good Muslim so the OIC summit and Erdogan’s visit to Somalia have also an Islamic solidarity and domestic dimension,” Idiz told Reuters,

Visits by world leaders to Somalia are extremely rare due to serious security risks. But Erdogan, a pious Muslim who fasts in Ramadan and has become a hero among Muslims for his stance on Israel, has said it is “impossible for us to be spectators to the human tragedy in Africa”.

It is especially dangerous to visit the Somali capital Mogadishu after Islamist rebels mostly pulled out last weekend, raising the spectre of more guerrilla-style attacks such as suicide bombings after their failure to win a military combat.

The government and African peacekeepers admit they do not control all of the capital even after the rebels’ withdrawal.

Ahead of his visit, posters of Erdogan against the backdrop of the Turkish flag were hung near Mogadishu’s airport, seaport and one of the capital’s main thoroughfares.

“The Turkish prime minister’s visit is a golden opportunity because it directs the world’s attention to Somalia,” Abdifatah Abdi Noor, a senior official at the Somali prime minister’s office, told Reuters.

He said most of the food aid, medicine and shelters for displaced Somalis are from Turkey and more ships and flights are on the way.

“We will seek long-term development projects from Turkey.”

Some 3.7 million Somalis are at risk of starvation, the majority of them in the south of the country that has been in a state of armed anarchy for two decades, complicating any humanitarian relief effort.

Hundreds of thousands have made the dangerous trek to the capital Mogadishu and its outlying areas in search of food aid.

Turkish foreign ministry officials said the OIC meeting is aimed at galvanising support for Somalia and drought-struck neighbouring regions. Davutoglu has said the famine in Somalia poses risks to other African countries.

Somalia’s President Sheikh Sharif Ahmed is expected to attend the one-day meeting in Istanbul and then accompany Erdogan to Mogadishu, Turkish officials said.

“We are expecting OIC nations to announce donations to Somalia during the meeting,” a Turkish foreign ministry official said.

Turkey, one of the fastest growing economies in the world, exported $7.27 billion to Africa in 2010, or 6.4 percent of total Turkish exports, compared to 51 percent to the European Union, Ankara’s biggest trading partner. Imports from Africa to Turkey reached $6.4 billion in 2010.

Those figures pale when it comes to China, which is doing $107 billion of business with the continent a year, India’s $32 billion or Brazil’s $20 billion.

Besides trade, Turkey is also seeking to raise it diplomatic presence in Africa. African votes played an important role when Turkey secured a seat on the United Nations Security Council.

Turkey, with its multi-party democracy and rapidly growing economy, is widely regarded as a model for development in other countries of the Muslim world.