Morocco World News
Home Economy Could Morocco be First to Get 42% Solar? 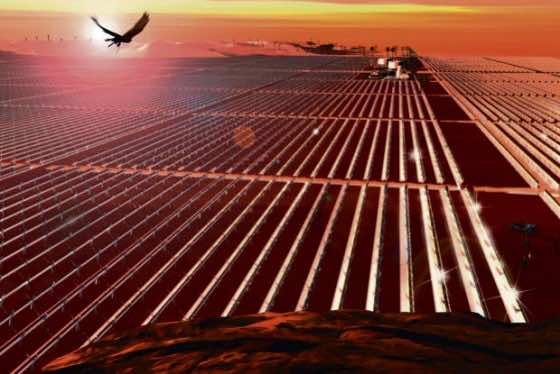 It might seem counter-intuitive, but an undeveloped North African nation could be the first in the world to get 42% of its electricity from solar power. It has set its policy to achieve that end. And, startlingly, undeveloped nations actually do now lead the world in the addition of new renewable energy. France has just stepped forward to help. (Paris Gives Morocco’s Solar Plan a Frank Chance)

The extraordinary Moroccan Solar Plan unveiled last November is aimed at achieving a hugely ambitious 42% renewable energy target by 2020, higher than California’s 33% and second only to Portugal’s 45%. Unlike them, it is putting all of its renewable energy eggs in one basket. Solar. All kinds of solar. Fourteen percent is to carved out for just concentrated solar power, CSP. So why Morocco?

Like Israel, Morocco has an energy balance heavily weighted against it by the need to import fossil fuels. With no fossil-fuel production capacity, Morocco has to import all its fuel requirements. Perhaps because Morocco is a monarchy, it can lever a tighter decisionmaking power center than in a democracy. In some ways, the fewer people needed to make a decision, the easier it is to run a country. China too has no trouble implementing renewable policy, because of its tightly held decisionmaking power, as a dictatorship.

But whatever the reason for the scale of this ambitious undertaking, the world has Morocco’s back in this endeavour. Solar trade shows like MENASOL and EneR in November 2011 are now drawn like magnets towards the region. Both the World Bank and the African Development Bank have now committed a variety of funding mechanisms to develop Moroccan solar.

Morocco’s policy framework is the result of government decision to be cautious in introducing feedin tariffs because it could put threaten financial stability, as happened in Spain. The set price Spain’s government offered to pay per kilowatt hour for solar was too generous, leading to a run of offers. Spain has many more megawatts in solar production than necessary as a result, and has had to modify its contracts, and even reduce them after the fact, demanding shorter hours of operation for solar power suppliers: eroding trust.

Learning from this, Morocco has a flexible policy with step downs built in from the start and has currently set two tariffs, one for peak and a lower one for offpeak energy production. In addition, it now has the regulatory framework in place to allow energy products from solar power to be exported, thereby making it of interest to both developers and investors. And it has established a single authority, the Moroccan Agency for Solar Energy (MASEN), to run the tenders and sign the contracts for all this new renewable power.