Morocco World News
Home News Middle-East Aid efforts in the Horn of Africa need to be scaled up... 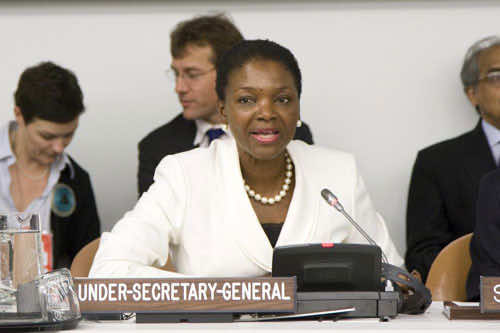 The United Nations humanitarian chief today stressed the need to further scale up efforts to assist the millions of people suffering in Somalia and the wider Horn of Africa, warning that more lives will be lost to famine and disease without urgent action.

There are already 3.2 million people on the brink of starvation in Somalia, where the UN has formally declared a state of famine in five regions in the southern and central parts of the country.

They are among the 12.4 million people across the wider region, encompassing Kenya, Djibouti and Ethiopia, who are in need of food and humanitarian assistance owing to the effects of the worst drought in decades.

“We’ve demonstrated, I think, how much can be accomplished when aid agencies are given the resources they need and can get to where they need to get to,” said Under-Secretary-General for Humanitarian Affairs Valerie Amos, who just returned from a three-day visit to Kenya and Somalia.

“But we’re faced with a still spreading famine in Somalia and with such a scale of suffering that every effort needs to be made and sustained in the months ahead,” she told a news conference in New York.

Ms. Amos, the UN Emergency Relief Coordinator, said the aid effort by the UN and its partners is accelerating.

“Hot meals are being given every day to almost 100,000 people. Half a million people are getting clean water, which is crucial as we seek to prevent the spread of cholera and other diseases. An emergency measles vaccination campaign to reach 88,000 children and 46,000 women is already happening.

“Nonetheless, it is clear that even in Mogadishu the famine has already claimed the lives of tens of thousands of people and it will kill many more if we do not further scale up our efforts,” she stated.

“We need to get more food and nutritional supplies, water, sanitation and hygiene equipment, and medical care to those who are in desperate need,” she added, while also noting that the crisis is not limited to Somalia.

According to the UN High Commissioner for Refugees (UNHCR), there are some 875,000 Somali refugees and asylum-seekers in neighbouring countries, with Kenya, Yemen, Ethiopia and Djibouti hosting more than 90 per cent of them. About 1.5 million more Somalis are internally displaced, mostly in the south-central region of the country.

“Even as Kenyans and Ethiopians confront the impact of the drought on their own communities, they are hosting hundreds of thousands of Somali refugees who have fled conflict and famine and now live in vast, overcrowded camps,” she said.

In Ethiopia, humanitarian agencies have provided food aid to some 3.5 million Ethiopians and 226,000 refugees. In Kenya, 1.3 million drought-affected people have received food aid.

So far donors have provided more than $1.3 billion to for the relief effort in the Horn of Africa, but just under $1.2 billion is still needed.

“There are still many lives that need to be saved in the Horn of Africa,” said Ms. Amos.