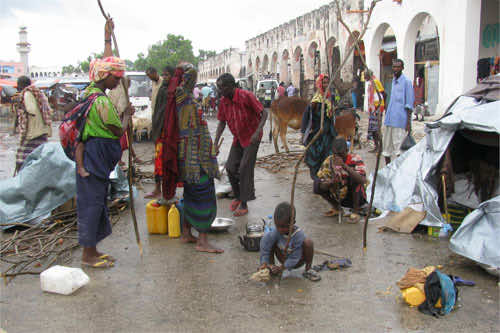 A United Nations-convened meeting to discuss ways to boost food security in the drought-prone Horn of Africa got under way in Rome today, as humanitarian agencies step up their response to cholera and diarrhoea in Somalia, where famine and water shortages have made people vulnerable to infectious diseases.

Agriculture ministers from the 191 Member States of the UN Food and Agriculture Organization (FAO), senior officials from the African Union and representatives from NGOs and other UN agencies gathered in Rome to take stock of the situation in Ethiopia, Djibouti, Kenya and Somalia, where more than 12 million people are facing a severe food crisis spawned by the region’s worst drought in six decades.

Five regions of south-central Somalia have been declared famine zones with tens of thousands of people, mostly children, thought to have died of starvation and related diseases in recent months.

The meeting at FAO headquarters in Rome will identify concrete programmes and projects, building on existing plans by governments and their humanitarian and development partners, for implementation to address the underlying causes of recurring food crises in the Horn of Africa.

The UN Children’s Fund (UNICEF) and UN World Health Organization (WHO), meanwhile, reporte that cholera cases in Somalia’s capital, Mogadishu, were rising and there are growing reports of acute watery diarrhoea in the southern port town of Kismayo and other urban areas.

Poor sanitation, shortages of clean water, overcrowding and high malnutrition rates have left people vulnerable to infectious diseases such as cholera and pneumonia, the two agencies said in a joint press release.

About 75 per cent of all cases of acute watery diarrhoea are children under the age of five. Cholera cases have been confirmed in the regions of Banadir, where Mogadishu is situated, Bay, Mudug and Lower Shabelle.

Some 4,272 cases of acute watery diarrhoea and cholera have been reported in Banadir Hospital in Mogadishu alone since January.

Partners in the health and water and sanitation clusters are preparing for a potential 100,000 cholera cases. Emergency diarrhoeal disease kits containing medical supplies such as syringes, infusions and oral rehydration fluids, already pre-positioned by UNICEF and WHO, have been sent to 13 hospitals.

An additional 200 diarrhoeal kits, each with the capacity to treat 100 severe cases and 400 moderate cases of cholera, are being procured and will be delivered in southern Somalia within weeks.

Case management of severe dehydration with or without malnutrition is being strengthened and focus is now on mobilizing a network of already trained community health promoters for door-to-door hygiene awareness campaign. Health posts will be stocked with essential medicines and oral rehydration salts to identify and promptly treat patients.

Many of southern Somalia’s rural areas and urban centres rely on shallow wells for water, which – unless protected or treated with chlorine – can serve as the perfect breeding ground for waterborne diseases.

Partners in the water, sanitation and hygiene sector are scaling up their effort to target 1.5 million people across high-risk areas of the south. Supplies of chlorine and essential hygiene items and household water treatment and storage are being distributed.

Already 217 water sources are being chlorinated, as well as 58 water points serving 483,200 residents in Mogadishu. Household hygiene supplies, including water purification tablets, soap and buckets, enough for 48,000 families, are being distributed at existing feeding centres for malnourished children.

“Our major concern is to monitor and detect new disease outbreaks in the many informal settlements set up by internally displaced people in and around Mogadishu,” said Marthe Everard, the WHO Representative for Somalia.

“For the last few years, a network of health workers reporting to the early warning system is in place, however they report through a health facility or mobile clinic. Yet the large numbers of displaced people in Mogadishu are making it more difficult to record the various diseases.”

Although cholera is endemic in Somalia, the last major outbreak was in 2007 when an estimated 67,000 cases were recorded. In recent years, efforts to chlorinate Mogadishu’s water supply, as well as improve hygiene and sanitation, have prevented a more serious outbreak. But with the large influx of some 100,000 people into Mogadishu this year, the city is experiencing an acute shortage of safe water and sanitation amenities.

The number of internally displaced persons (IDPs) in Mogadishu has swelled to 470,000 as more desperate people have entered the city from the famine-stricken southern areas to seek assistance. Many of the IDPs are living in overcrowded settlements.

“There is no need for a child to die of diarrhoea, yet this is tragic reality for a Somali child, who is acutely malnourished. It is a lethal combination.” said Rozanne Chorlton, the UNICEF Representative for Somalia.

“These types of diseases can be prevented and treated quickly, but to save children’s lives we need to make sure safe water, sanitation and hygiene, along with early access to primary health care, are an integral part of our emergency response.”