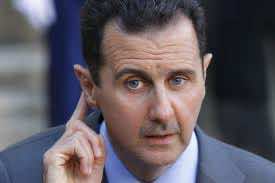 US President Barack Obama has led a chorus of calls by world leaders for Syria’s president to step down, as the United Nations warned his regime could be guilty of crimes against humanity.

Obama also slapped harsh new sanctions on Syria, freezing state assets and blacklisting the oil and gas sector, in an escalation of pressure aimed at halting a bloody protest crackdown that has claimed more than 2,000 lives.

The White House later expressed hope that the European Union would follow suit, conscious that the United States has only limited leverage over Damascus compared to the Europeans, whose oil purchases help to bolster the regime.

It was the first explicit US call for Syrian President Bashar al-Assad to resign since the pro-democracy uprising — inspired by the revolts that toppled leaders in Egypt and Tunisia — erupted in mid-March.

“We have consistently said that President Assad must lead a democratic transition or get out of the way. He has not led. For the sake of the Syrian people, the time has come for President Assad to step aside,” Obama said.

“We call on him to face the reality of the complete rejection of his regime by the Syrian people and to step aside in the best interests of Syria and the unity of its people,” the trio said in a joint statement.

The United Nations said a humanitarian mission would go to Syria this weekend as European powers launched a campaign for UN Security Council sanctions against Assad.

The civilian death toll from the protests has now passed 2,000, UN under secretary general B. Lynn Pascoe told the 15-nation body.

Britain, France, Germany and Portugal said they were preparing a Security Council sanctions resolution. The United States strongly backed the move, but resistance was expected from veto-wielding permanent members China and Russia.

Secretary of State Hillary Clinton said the new US sanctions banning investment and most other economic activities in Syria as well as imports of Syrian oil and gas would “strike at the heart of the Syrian regime.”

European nations import most of the oil from Syria, which exported some 148,000 barrels a day in 2009, according to the US government’s Energy Information Administration.

“America doesn’t have the ability to do it alone. But they are acting as a choir-master and hoping that by setting an example, Europe will pull the plug,” said Joshua Landis, director of the Center for Middle East Studies at the University of Oklahoma.

UN human rights chief Navi Pillay meanwhile said Syria may have committed crimes against humanity and urged the Security Council meeting to refer the matter to the International Criminal Court.

A report by Pillay described “widespread or systematic attacks against the civilian population, which may amount to crimes against humanity.”

It said Syrian security forces had targeted civilians with ground forces, rooftop snipers and aircraft “with an apparent shoot-to-kill policy.”

The document also describes summary executions, including reports that “forces conducted regular raids in hospitals to search for and kill injured demonstrators,” as well as allegations of torture and arbitrary arrests.

It has been difficult to independently confirm events on the ground as Syria has heavily restricted media access since the start of the unrest.

Syrian security forces deployed in force Thursday in several locations, including the suburbs of Damascus, where protests were reported and shots were heard, a rights group said.

The deployments came after Assad told UN chief Ban Ki-moon early Thursday that his security forces had ended operations in towns hit by a popular uprising which Damascus claims is being fomented by “armed terrorist gangs.”

On Monday, the UN Human Rights Council is to hold a special session on Syria requested by 24 members, including four Arab members — Jordan, Kuwait, Qatar and Saudi Arabia.