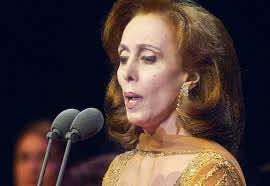 Fairuz, or the Arab Edith Piaf, was revealed by the famous Lebanese composers- song writers Rahbani brothers (Assi and Mansour)  in the 50’s. Her magical voice won the hearts of Arabs from the Maghreb to the Arabic Gulf. She is considered to be the last symbol of the Arab music golden era. Her voice is representative of the Lebanese people’s wounds, fears, hopes and dreams from the independence to nowadays.

Fairouz’s crystalline voice – her stage name means “turquoise” in Arabic – and her haunting lyrics about love, life, Lebanon and Jerusalem, have made her an icon second only to the legendary Egyptian singer Umm Kulthum. Fairouz, who is 75 now, is loved and celebrated as a national treasure across the Arabic-speaking world and beyond.

Years of absence……behind the scenes….. A silenced Diva……………

After extended absences from the scenes, the legendary Arab singer Fairouz has majestically stepped on stage in Amsterdam Festival at “Royal Theatre Carré” last June 26.  The Festival’s directors invested great personal effort in getting Fairuz to perform at the event.  A deal that took ten years to be materialized.

The diva made a spectacular entrance, cheered by the public who does not have the chance to see her perform live very often. The audience was made of local residents, Lebanese expatriates and Middle Easterners. Many made the trip to Amsterdam to take a great delight in listening to a mixture of her classics and new songs.

Amsterdam’s festival was the Diva’s first come back since her memorable concert in Bayreuth in 2010 after long years of absence due to legal battles, over song copy rights, with Rahbani brothers’ heirs. These latters were demanding an equal share of revenues from Fairouz’s performances, and the case was eventually brought to Lebanese courts which ruled in favor of Mansour Rahbani’s heirs. Her latest appearances were in 2006 during the re-make of Rahbani’s play “Sah El Noum” and in 2003 in Beitedine Festival, a place that saw her glorious beginnings.

When the Arab world was amazed by the romantic melodies of singers such Abdel Wahab and Abdel Halim Hafez, Lebanon was witnessing the birth of a shining star. Fairouz was born on 21 November 1935 as Nouhed Haddad, in a Christian family. The same year little Nouhed and her family moved to Beyrouth. She studied at Saint-Joseph School where she was a distinct member of the choral, that led her to the national Lebanese radio as a backing vocalist and was introduced at that period to Halim El Roumi,  manager  of Near East Radio. El Roumi was confident about the young Fairouz’s future and composed her first songs. It’s at El Roumi’s that Fairouz met the Rahbani brothers Assi and Mansour, a key event in her life and a real turning point in her career( Fairouz married Assi from 1954-1978).

The trio made a revolution in the Arab music, composing successful melodies from symphonies to others inspired by tango and Latin dances. After being criticized in the beginning, the Rahbanis organized a successful show during BaalBeck notorious festival where Fairouz met for the first time her public live, she triumphed and was called that time the seventh column of BaalBeck scene.

The world opened its doors to Fairouz for a career that went beyond Lebanon.  She performed in Syria in 1960 and 1962.  Fairouz and the Rahbani’s made it to Piccadilly theater, in 1967, to present their last production: the musical theater Hala wel Malik (The king and Hala), they returned back there in 1972 with the play Sah El Noum (Good Morning)

By 1979, Fairouz was artistically separated from the Rahbani Brothers, and started working with her older son Ziad who composed her new album the same year entitled Wahdoun (alone). The album included jazzy melodies and arrangements (Wahdoun-alone) and oriental melodies (Habbaytak ta nsit ennawm- I loved you till I forgot my sleep), the Diva moved from the romantic texts of Assi to texts soaked with Ziad’s special black comedy. Ziad composed a second album in 1987 titled Maarefti fik (When I met you) always in the same jazzy style of the Rahbani’s.

Her album Kifak enta? (How are you?, 1991) was criticized because of its shocking lyrics, and later become a classic Fairouz performs at every concert. The diva and her son Ziad took part in Beiteddine Festival with a symphonic orchestra under the leadership of maestro Karen Durgaryan. They gave three successful concerts comprising her classics and new songs for the delight of her fans.

The legendary Fairouz, who was adulated by generations of fans and admirers, was not such a happy woman, her reserved and secret nature was often exceeded by the speedy rhythm of the Rahbani brothers and their high sense of perfection. After Assi’s death, she continued her way, collaborating with her elder son Ziad, their last album Eh fi amal (there is still hope, 2000) was a clear message that despite the hardships she has been through in her life, the diva was still dedicated to her musical passions. Her works remain a great contribution to the golden era of Arabic and international music history.