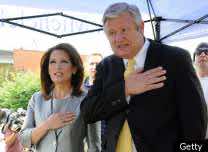 Republican presidential contender Michelle Bachmann has recently faced questions regarding her comment that she is “submissive” to her husband because of her religious beliefs. She has vacillated in her explanation. When running for Congress in 2006, she told an audience that she studied tax law because her husband instructed her to do so, and in order to be submissive to him she obeyed. She explained, “[m]y husband said ‘Now you need to go and get a post-doctorate degree in tax law.’ Tax law! I hate taxes — why should I go and do something like that? But the Lord says be submissive. Wives, you are to be submissive to your husbands.”

When asked, in the Iowa GOP debate last week, about her previous comments regarding her marriage and her desire to be submissive to her husband, she seemed to backtrack, explaining: “[w]hat submission means to us … it means respect. I respect my husband … and he respects me as his wife.”

This glib response deflects the question and is contradictory to her previous statements. The Ephesians verse actually states:

How does submission translate into mutual respect? This is a question that many Christian women have sought to answer, and Bachmann’s understanding that submission ultimately is manifested as mutual respect in modern marital relationships may be widely shared.

While Bachmann may not have any quick or easy way to explain her beliefs, she gets sympathies from one unexpected segment of American society: Muslim American women.

Like Christian women who have to contend with the passage in Ephesians instructing women to submit themselves to their husbands in everything, Muslim women have to grapple with a certain passage in the Quran delineating the hierarchy in marital relationships. The chapter of the Quran entitled “The Women” has one verse stating:

Men are the maintainers of women because God has made some of them to excel others and because they spend out of their property; the good women are therefore obedient, guarding the unseen as God has guarded… (4:33)

This verse is subject to numerous interpretations. Some scholars contend that the language stating that men are the maintainers of women is related in part to the Islamic laws of inheritance. Because men are responsible for financially supporting their families, they are entitled to twice the share of property as their sister, which in turn further enables them to support their families.

The Quranic language also refers to the physical differences between the genders, such that men in general have more physical strength and related ability to work to support their wives. As such, the reference to men “excelling” above women does not mean that men are ontologically superior to women, but merely that they are more physically and financially able to serve as providers than women.

This interpretation makes sense in the overall context of the Quran, which repeatedly provides that men and women are equal in the eyes of God. In the chapter entitled “The Parties,” the Quran states:

Through this verse and many others like it, the Quran provides that the worship and value of men and women is equal in the eyes of God, and neither is inherently superior to the other.

Muslim female politicians have tried, like Bachmann, to explain what these religious intonations mean to them. One of the strongest rebuttals against those who seek to capitalize on such verses to sideline women has been given by Benazir Bhutto, the former Prime Minister of Pakistan and the first woman ever elected to head an Islamic country. She stated in a speech to the World Conference of Women in Beijing:

To those who claim to speak for Islam but who would deny to women our place in society, I say: The ethos of Islam is equality, equality between the sexes. … My presence here, as the elected woman prime minister of a great Muslim country, is testament to the commitment of Islam to the role of women in society.

Bhutto’s view that Islam guarantees fundamental equality between the sexes, and is not a hindrance to a woman seeking a position of power, is shared by hundreds of millions of Muslims. That is why Pakistan, Indonesia and Bangladesh, among other Muslim nations, have elected women as their heads of state.

These statistics reveal the underlying truth of Muslim American gender relations: Muslim American women and men agree with Bachmann’s interpretation of “submission” as having primarily to do with respect.