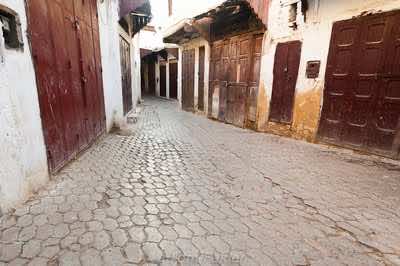 “At Fez the believer charged with waking the woman is called the dakak…’one who knocks’…The position is hereditary…He receives a small sum as remuneration from the Habous* and each inhabitant contributes toward paying the dakak of his quarter by handing over fifty centimes with seventeen measures of wheat.”

Arriving in Fez before Ramadan, I knew to expect limited restaurant service, shortened working hours for businesses of all kinds, and erratic availability of Petite Taxis. What I did not anticipate fully were the late-night sound effects, beginning with trumpets ratcheting up the volume about 10:00 pm, and sounding very much like a Moroccan wedding procession.

Early in the day, there is an eerie hush over the medina. Many people are home, sleeping off a night of three meals packed into eight short hours. Most shops are bolted shut and streets are empty. By mid-day, doors are open again, and the souks back in business.

Baguettes, as well as traditional Moroccan breads, are in plentiful supply. For several hours in the afternoon, the souks are packed, filled with shoppers purchasing meats, fish and fresh produce for the evening’s round of meals. A lot of shopping goes on before the cannon at Borj Sud, a 16th century Saadian fort on a hill south of Fez, fires twice to signal time to break the fast.

Fasting hours behind them, men pack street-side cafes, ready to join their fellows for coffee and smokes. Families turn out in force, too, for a stroll along the boulevards in the New City and the perimeters of the medina. Children, energized with sugary drinks, honeyed pastries and Ramadan soup, play late into the evening.

Around 10:30 pm, horns begin to sound in the distance, blasting their one-note repertoire. Outside my door, footsteps and conversations of passersby continue until the wee hours, echoing through the narrow passageways.

Just before 2:00 am, we hear the drum and singing of the dakak, a long-standing Ramadan tradition. These days, the fellow no longer knocks at individual doors to awaken the women of medina households to their pre-dawn duties. However, the chanting drummer’s task remains that of signaling time for preparation of the early morning meal.

The dakak begins his drumming at Oued Chorfa, a small square a few steps inside the medina near Bab R’cif, and passes my window as he starts up the hill. The journey will take about an hour. When I hear the dakak go by, I cannot help but listen, knowing that in a couple of hours, with the first call to prayer from the city’s hundreds of minarets, a new day of fasting will begin.

*Prior to Moroccan independence, the charitable endowments benefitting religious organizations and public institutions.

first Published at The View From Fez
Words and photographs by Anita Breland and Tom Fakler.