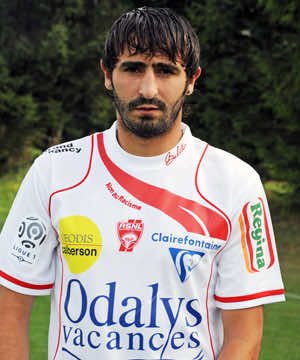 Zerka, 29, joins the Revolution from Iraklis FC, recently relegated from the top flight in Greece. Prior to Iraklis, Zerka spent 10 years playing in France with Nancy and Nantes.

“We are looking forward to Monsef’s arrival,” Michael Burns, Revolution Vice President of Player Personnel, said. “He is an experienced player who will provide us with another attacking option.”

During his time with Nancy, Zerka made 173 appearances and netted 17 goals. The French side has been competing in Ligue 1 since the 2005-06 season. Zerka appeared in 85 Ligue 1 games, scoring 13 goals in the four years he spent with the club at the highest level of French football.

Zerka was eligible to play for either the French or Moroccan national teams because of his dual citizenship and chose to represent Morocco, with whom he has earned 12 caps and scored three goals.

Zerka will fill the team’s sixth international player spot out of a possible eight. Per club policy, terms of the contract were not released. He will be officially added to the Revolution’s roster pending P1 Visa approval.