Morocco World News
Home Highlights on Morocco Morocco: Parliament must be composed of at least one third of young...

New York - The Alternative Citizen Movement (ALCI) called, on Friday in Fez, for a parliament and government that should be composed of at least one-third of young people, the Maghreb Arab Press News agency reported on Friday. 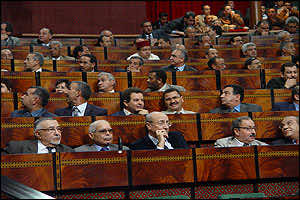 By
Adnane Bennis
-
Adnane Bennis is a national of Morocco, obtained his Bachelor’s Degree in Computer and Information Science from East west University in Chicago.
Aug 20, 2011
Spread the love

New York – The Alternative Citizen Movement (ALCI) called, on Friday in Fez, for a parliament and government that should be composed of at least one-third of young people, the Maghreb Arab Press News agency reported on Friday.

The political reform of the state and political actors must go along the path of effective involvement of young people in the national political scene, ensured by the effective implementation of law and a percentage reflecting the presence of youth in society, underscored the Movement.

The Movement noted, however, that the process of ongoing reforms remains prisoner of “paternalistic authority” both within the state and political parties, who do not look positively on the deepening of the representation of young people.

While noting the progress made by the new constitution, civil society actors who took part in the meeting convened by the ALCI, emphasized that the further integration and representation of youth in the national list does not resolve the question of the rejuvenation of the political life, and is merely an attempt to “dodge the issue”.

The debate on the promotion of youth representation should also include, in their view, the establishment of an appropriate electoral system and a fair redistribution towards a greater presence on the ground.

Founded in 2004, ALCI is defined as an association for democratic social, sustainable, equitable and participatory development, as well as a forum for the promotion of economic, social and civic rights.

Its main objectives include deepening equality, citizenship and democracy in the social, economic and legal fields, as well as the fight against gender-based discrimination, the defense of women’s rights and the integration of young people in political decision-making.