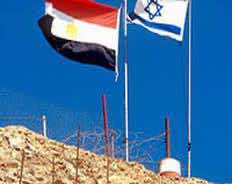 Cairo announced on Saturday it will recall its ambassador to Israel pending an investigation into the deaths of at least three Egyptian security personnel killed near the border, amid heightening tensions between the two countries.

Egypt said on Saturday it was withdrawing its ambassador from Israel pending an investigation by the Jewish state of border killings of Egyptian security personnel that have raised tension between the two countries.

A few hundred Egyptians kept up a protest at the Israeli embassy in Cairo that began on Friday night, when they burned Israeli flags and tore down metal barriers. Banging on the barriers, they demanded the expulsion of the Israeli ambassador.
Egypt’s cabinet also summoned the Israeli ambassador in Cairo in protest and demanded an official apology from Israeli leaders for statements accusing Egyptian military rulers of losing their grip on the Sinai peninsula.
An army officer and two Egyptian security men died when Israeli troops pursued gunmen who killed eight Israelis on a road running close to the Egyptian border on Thursday. Seven Egyptian security men were wounded.
The incident has strained ties between Israel and Egypt following the uprising that ousted President Hosni Mubarak in February and strengthened forces hostile to the Jewish state.
A senior Israeli defence official said Israel sees its treaty with Egypt as a “fundamental element of existence” in the Middle East and had no intention of harming any of its security personnel in the incident, which was still under investigation.
Amos Gilad, a liaison officer with the Palestinians and Egypt, said on Israel Radio: “One thing is sure, there is not a single person in Israel who wants to harm an Egyptian policeman or soldier”. He said relations with Egypt were based on “dialogue and cooperation” and that it still was not clear who had killed the three Egyptian security personnel.
Israel had swiftly pinned the blame for Thursday’s attack on a Palestinian group independent of Islamist Hamas and killed the faction’s leadership in an air strike on the Gaza Strip on Thursday, and launched more than a dozen more raids on Friday.
This is the second time that Egypt has recalled its ambassador in Tel Aviv. In 2000, the Egyptian envoy was recalled over heavy Israeli shelling of the Gaza Strip.
“The cabinet committee has decided to withdraw the Egyptian ambassador in Israel until the result of investigations by the Israeli authorities is provided and an apology from the Israeli leadership over the hasty and regrettable statements about Egypt is given,” the cabinet said on its official page online.
Israel expressed concern about security in the Sinai peninsula and said the attackers infiltrated from the Hamas-run Gaza Strip via Egypt’s Sinai desert, despite stepped-up efforts by Egyptian security to root out Islamist radicals.
Cairo rejected the charge it had lost control of Sinai and accused Israel of blaming Egypt for its own security failings.
Egypt “lays on Israel the political and legal responsibility of this incident, which constitutes a breach of the peace treaty between Egypt and Israel”, the cabinet said.
“The cabinet assigns the Egyptian foreign minister to summon the Israeli ambassador in Cairo … in protest over shootings on the Israeli side of the border that led to deaths on the Egyptian side,” state TV reported.
The cabinet meeting, attended by army generals and Egyptian intelligence chief Murad Muwafi, asserted Egypt’s ability to fully protect its borders and Sinai, the cabinet statement said.
Egypt will take every precaution to secure its border with Israel to deter any infiltrators, and to respond to any Israeli military activity toward the Egyptian border, it added.
The cabinet decisions followed a four-hour meeting held by the crisis management committee.
Egypt and Israel sealed a peace treaty in 1979, agreed by former Egyptian President Anwar Sadat and Israeli Prime Minister Menachem Begin, after fighting four wars since 1948.
The Sinai forms a huge desert buffer zone between Egypt and Israel. Parts of their mountainous border remain porous.
“This is a step in the right direction because it respects the right of Egyptians to life and honours the Jan. 25 revolution they created to regain their honour,” a low-ranking Egyptian army officer said of the cabinet decisions.
Emad Gad, senior researcher at Al-Ahram Centre for Political and Strategic Studies, said neither side was keen to escalate the issue further as it would not benefit either country.
“Withdrawing the Egyptian ambassador is a good step but Egypt still has to insist on a formal apology from Israel,” he said.