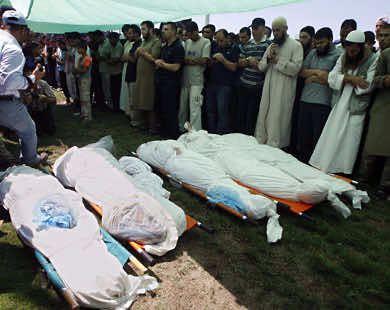 Israeli aircraft struck militant outposts in Gaza and Palestinians fired rockets back on Friday following deadly gun attacks along the desert border with Egypt that have raised tensions between Israel and the new rulers in Cairo.

Egypt formally protested and demanded Israel investigate the deaths of three of its security men, who, it said, were killed when Israeli forces hunted for the gunmen behind Thursday’s attacks. In all, more than 20 people have been killed.

In anger at Israel’s punishing raids in which at least 15 have been killed since Thursday, Hamas gunmen in Gaza said they were calling off a de-facto truce in force with Israel since 2009, paving the way for a further violent escalation.

Israel had swiftly pinned the blame for Thursday’s attack on a Palestinian group independent of Islamist Hamas and killed the faction’s leadership in an air strike on Thursday, while launching more than a dozen more raids on Friday.

Among those killed in Israel’s strikes were 11 militants and four civilians, including a physician and children aged 2,5 and 13, said Hamas medical sources. Gaza militants responded by firing at least 24 rockets at Israel, spreading panic, and injuring two in the city of Ashdod.

“We have a policy of exacting a very heavy price of anyone who attacks us and this policy is being implemented,” Israeli Prime Minister Benjamin Netanyahu said on Friday while visiting wounded compatriots in hospital.

Hamas, whose militants have not claimed responsibility for any of the rocket fire, at first countered with warnings they would “not allow the enemy to escalate its aggression without getting punished.”

A Hamas radio station announced the group’s armed wing had decided “there is no longer any truce with the enemy,” alluding to a 2009 deal that ended a three week Israeli offensive targeting militants firing rockets at the Jewish state.

In an apparent attempt to ease tensions later, a Hamas spokesman later told Reuters the radio statement “is not the official position.” Gaza’s Hamas leader Ismail Haniyeh said separately he was seeking Egyptian and United Nations intervention “to stop the aggression on Gaza.”

Israeli forces were swift to blame the Popular Resistance Committees (PRC) armed faction for Thursday’s attack near the Red Sea resort of Eilat which killed when eight Israelis.

The group denied involvement in Thursday’s ambushes, but did claim responsibility for some of Friday’s rocket fire.

“We would hope that yesterday’s terrorist attack on the border would serve as an impetus for the Egyptian side to more effectively exercise their sovereignty in Sinai,” said a senior Israeli official, who declined to be named.

Cairo rejected the charge and voiced anger at the death of an army officer and two security officials on their side of the border on Thursday, although it was not clear how they died. Witnesses said those who attacked the Israelis had disguised themselves as Egyptian security forces.

“Egypt has filed an official protest to Israel over the incidents at the border yesterday and demands an urgent investigation over the reasons and circumstances surrounding the death of three of Egypt’s forces,” an army official in Cairo said.

On Friday evening, about 100 protesters gathered at the Israeli embassy in Cairo, tearing down the metal barriers at the entrance to the building.

“I call on all Egyptians to protest until the Israeli ambassador is kicked out of the country,” said one of the demonstrators, Essam Hafiz.

The Israeli military said there was an exchange of fire between its troops and the militants along the border on Thursday night. “The IDF (army) will investigate the matter thoroughly and update the Egyptians,” it said in a statement.

In New York, the U.N. Security Council met to consider a U.S.-drafted statement condemning the attack on the Israelis, but Lebanon, the sole Arab member, prevented agreement after insisting that the 15-nation body also condemn the Israeli strikes in Gaza, U.N. diplomats said.

U.S. envoy Rosemary DiCarlo described the failure of the council to speak on the issue “regrettable.”

The sparsely populated Sinai forms a huge desert buffer zone between Egypt and Israel, who sealed an historic peace treaty in 1979 after fighting two wars in less than a decade.

In Washington, Secretary of State Hillary Clinton condemned the “brutal and cowardly attacks” on the Israelis near Eilat. She said the violence “only underscores our strong concerns about the security situation in the Sinai Peninsula.”