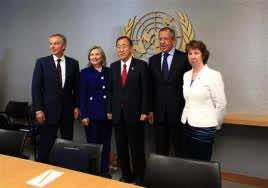 The United Nations and its diplomatic partners in the search for peace in the Middle East on Saturday strongly condemned the attacks in southern Israel earlier this week, as well as all acts of terrorism in the region, and urged all parties to exercise restraint.The Middle East Quartet, which comprises the UN, the European Union, Russia and the United States, said the attacks were “cowardly acts of premeditated terrorism” and expressed hope that those responsible for planning and carrying out the violence will quickly be brought to justice.

Gunmen reportedly fired at a bus travelling close to the Israeli-Egyptian border on Thursday. Two other vehicles in the same area were subsequently hit by either rocket fire or an explosive device. Several people were killed in the raids.

“The Quartet remains concerned about the unsustainable situation in Gaza as well as the risk of escalation, and calls for restraint from all sides,” it said in a statement. It also voiced concern over the security situation in the Sinai Peninsula.

The Quartet extended its deepest condolences to the families of the victims of the attacks.

In his condemnation of the violence on Thursday, Secretary-General Ban Ki-moon also expressed concerned over the risk of escalation and urged all parties to act with restraint.