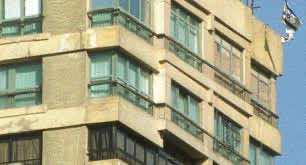 A young 23-year-old Egyptian climbed to the top of a 22-storey apartment building housing the Israeli embassy to bring down the Israeli flag.

He has become an Egyptian ”Hero“ with everyone calling him the Egyptian Spiderman.

The Egyptian Journalism Syndicate held a press conference for him on Sunday afternoon to introduce him to the masses who want to know more about the “Egyptian Spiderman”.

Ahmed Al-Shahat from Sharqiya governorate is the Egyptian who had previously climbed to top of the highest lighting column in Tahrir square on Friday 8 July, “The Friday of persistence“, to wave the Egyptian flag.

Early on Sunday morning, on his way up the security forces urged him to come down, while the protesters urged him to complete his mission of bringing down the Israeli flag and putting the Egyptian one instead, despite fears for his life.

“I was told that there might be snipers who will shoot me, but I didn’t fear for my life. I just wanted to bring down the Israeli flag and put the Egyptian flag instead,” Shahat said during the press conference.

He went on to say that “Every Egyptian and Arab wanted to do this and I wanted to make them happy“.

“Israel must know that all Egyptians are willing to give their lives for Egypt “, he added.

Brazilian cartoonist Carlos Latuff drew Shahat as a “Spiderman” wearing the Egyptian flag as a costume, while burning down the Israeli flag and Al-Ahram website put him on its front-page.

Thousands of Egyptian protesters have been demonstrating at the Israeli embassy since the attack on Egyptian security forces last Thursday, demanding the expulsion of the Israeli ambassador and proper reactions from the government.