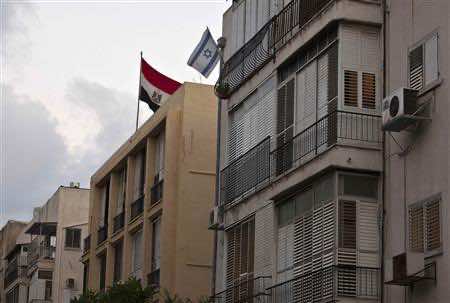 Egypt and Israel sought on Sunday to defuse a diplomatic crisis over the killing of five Egyptian security personnel during an Israeli operation against cross-border raiders, but crowds of Egyptians protested angrily at the Israeli embassy in Cairo.

One demonstrator scaled several floors of the high-rise embassy building overnight to tear down the Israeli flag and replace it with an Egyptian one.

Ahmad al-Shahat quickly shot to fame on Twitter under the name “Flagman,” with some users of the social network asking the government to name a street after him.

Newspapers and one would-be Egyptian leader feted him as a hero.

“Hamdeen Sabahy, the Egyptian presidential candidate, sends a salute of pride to Ahmad al-Shahat, the public hero who burnt the Zionist flag that spoiled the Egyptian air for 30 years,” Sabahi said in statement.

Several hundred protesters remained in front of the Israeli embassy on Sunday, watched over by hundreds of troops and police. Some demonstrators said they would stay until Israel’s ambassador is ejected from Egypt.

The Cairo-based Arab League condemned “the Israeli attack on the Egyptian forces” in a statement and said Israel bore “full responsibility for this crime.”

However, there were signs that Egypt and Israel were both trying to ease the gravest crisis in their relations since longtime ruler Hosni Mubarak’s overthrow in February.

The spat has highlighted the dilemma faced by the generals now ruling Egypt, caught between pressure to preserve the 1979 peace treaty with Israel and popular hostility to the Jewish state, perceived as trampling on national dignity.

Egypt said on Saturday it would recall its ambassador from Israel after the killings that it said breached the peace treaty. The Foreign Ministry summoned the Israeli charge d’affaires to protest and demand a joint investigation.

Israeli Defence Minister Ehud Barak said Israel regretted the deaths and he told the army to conduct the investigation with Egypt, which responded with cautious approval.

A delegation led by an unidentified high-ranking Israeli envoy arrived in Cairo on a private plane from Tel Aviv on Sunday to a low-key reception, airport sources said. Four cars drove onto the tarmac to whisk the delegation away.

Officials from Egypt’s defence ministry and the ruling army council were due to meet on Sunday morning, according to a cabinet official who asked not to be named.

It was unclear if Egypt’s ambassador in Israel had actually returned home and a strongly-worded initial statement announcing his withdrawal was removed from a government website, prompting speculation that Cairo might have retracted its decision.

A spokesman said the cabinet stood by statements made by its information minister, but declined to comment on the recall of the ambassador, which was also reported by state media.

Mubarak’s removal in a popular revolt has emboldened many Egyptians to voice their demands on the streets and allowed anti-Israel Islamists to play a greater role in formal politics.

The army is trying to keep a lid on social tensions as Egypt prepares for elections later in the year as part of a promised transition to democratic, civilian rule.

Egypt’s condemnation of Israel in a statement after a second cabinet crisis meeting on Saturday was unusually blunt.

“Egyptian blood is not cheap and the government will not accept that Egyptian blood gets shed for nothing,” state news agency MENA quoted a cabinet statement as saying.

The Israeli decision to work with Egypt to investigate the killings is “positive in appearance but does not fit with the weight of the incident and the state of Egyptians’ outrage from the Israeli actions’, MENA added.

“And just as Egypt confirms it is keen on peace with Israel,

Tel Aviv will also have to share its responsibilities in protecting that peace,” MENA said.

The statement said the government had asked for a deadline for the joint investigation to conclude its work, adding that crisis meetings would continue until the results are released.

The crisis began when gunmen killed eight people in southern Israel on Thursday in attacks near Egypt’s porous desert border, prompting Israeli forces to chase the infiltrators, killing seven of them.

Israel blamed the attack on a Palestinian faction that entered from the Hamas-run Gaza Strip via Egypt’s Sinai desert.

The Israeli military killed the faction’s leadership in an air strike in Gaza on Thursday and launched more than a dozen more raids on Friday. Medical officials say at least 15 Palestinians have been killed, including five civilians, three of them children.

“We ask the Security Council to … quickly take all necessary procedures to stop the offensive on the Gaza Strip,” the Cairo-based League said in a statement after holding an urgent meeting at the request of Palestinians.

It called Israel’s attacks “a violation to international laws and treaties and a threat to the security, peace and stability in the region.”

Palestinian militants fired at least 50 rockets at Israel from the Gaza Strip on Saturday. An Israeli man was killed and at least seven other people were wounded by rockets.

Militants fired a dozen more rockets from Gaza towards Israel on Sunday. At least two landed in the Egyptian border town of Rafah, apparently in error, but did not explode and no one was hurt, an Egyptian security source said.

The U.N. is due in coming days to publish the results of an investigation into Israel’s seizure of a Gaza-bound ship last year in which nine Turks died.

Israel has said it would pay into a “humanitarian fund” for those bereaved or hurt aboard the ship, which was trying to break a blockade of Gaza, but it has refused to apologise.

Turkish Foreign Minister Ahmet Davutoglu warned Israel on Saturday that if it did not take steps laid out in a U.N. statement following the killings, relations between Turkey and Israel would deteriorate.

“Israel should not think that the Palmer report will be published and the present stalled state of relations will continue as they are… They will get worse,” Turkish state-run Anatolian news agency quoted Davutoglu as saying.