Closely linked to women’s role, voice and participation in society is their right and access to education. 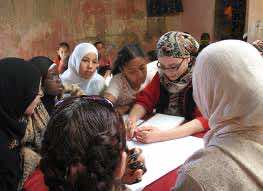 Rabat – Influencing numerous elements governing women’s social status, including social dependency, political marginalization, and economic discrimination – education plays a pivotal part in advancing the role of all women. What is the current status of women’s education in Morocco, and what are the existing barriers?  Could the political reform as context and the new constitution as a means increase school enrollment ratios and literacy among women and girls?

The socio-economic and demographic profile of the Moroccan woman indicates a society currently undergoing change. Yet, nearly two-thirds of the country’s women are illiterate and evidence reveals patterns in school enrollment ratios and literacy that are strongly divided along gender lines.

Although overall access to education has increased and many more women are now pursuing higher education, these advances have failed to eradicate the gender gap. Enrollment ratios of females lag behind those of their male counterparts at all levels of education.

In terms of urban-rural dichotomy, the situation for women in rural areas remains significantly poorer with rates of illiteracy standing at 87 percent.  Where only one out of ten girls attends secondary school, the implementation of compulsory education in rural areas remains a monumental obstacle to overcome for Moroccan authorities.

Despite compulsory education laws, open admissions policies, and free education, schools are still inaccessible to many parts of the female population. Barriers to girls’ education are not only found in school administrations but also in the home, in the marketplace, and in society at large.

Cultural norms and the level of economic development continue to give rise to the obstacles these women face in their educational pursuit, as well as the interaction between a conservative culture and economic structures that have resulted in Middle Eastern and North African (MENA) countries, on average, seeing lower levels of women’s literacy and enrollment rates compared to other regions with similar income levels. Out of the 75 million illiterate adults in the MENA region, more than half live in Egypt, Iraq, and Morocco.

Prevailing obstacles to increased investment in women’s education are deeply-rooted in patriarchal and religious-cultural patterns; particular aspects of the socio-economic and cultural context surrounding women’s rights in Morocco are distinctive to the country and extreme interpretations of the religion continue to pose particular problems for women.  Cultural practices, traditional gender roles, and societal attitudes still play a vital role in terms of who can and cannot benefit from the social right of education.

Interconnected with female illiteracy rates is the socialization of girls and the traditional concept that women should dedicate themselves principally, or completely, to their husband and family. Education is also discouraged as it threatens a woman’s probability and suitability to become a wife. In more extreme cases with traditional societies, education beyond basic literacy reduces a woman’s chances to marry.

While the last decade’s political reforms have revealed little progress in the status of Morocco’s women, the new constitution promotes democracy, modernization, and enhanced civil rights. It could in itself symbolize a change in attitude towards the role of women. Propositioning fundamental change in the centrality of a monarchy, political reform could influence the profoundly ingrained aspect of Moroccan history, society, and political culture formerly tied to the absolute control of the king and the previous status quo.

Vital to the process of increasing women’s rights and access to education is also the civil society, the women’s movement, non-governmental organizations, and the international community.  Active participation, contribution, and coercion must be multifaceted and versatile, as well as include all levels of society.

In the context of increased political liberalization and expansion of the freedom of expression, gender issues are a matter of national dialogue for the first time in the country’s history. Women have developed a deeper awareness of their rights and conditions and are demanding equality in the family and society; calling for women’s economic, political, and social empowerment.  In addition, economic changes are creating an impetus for women to become more active outside the home.

The social and economic benefits of investing in women’s education are vast. A better-educated society enhances labor market productivity and income growth, thus promoting the development and country-level economic growth.

In an increasingly globalized economy, low rates of illiteracy and reduced gender gaps in educational attainment would enhance Morocco’s competitiveness. Furthermore, women obtaining the appropriate education and training could take full advantage of the opportunities posed by economic global trends.

Educating women also has significant beneficial effects on social well-being not measured by the market. Women’s education is key to gender equality and empowers women’s participation in decision-making: educated women are more politically active and better informed about their legal rights and how to exercise them.

Literacy is a very important factor in predicting the age of women when they get married and their first birth. With increased female education, fertility, population growth, and infant and child mortality fall and family health improves. An important intergenerational effect is improved educational outcomes for children.

While Morocco has experienced a number of encouraging trends in girls’ and women’s education, further country-level investment is a requisite. Barriers to female enrollment need to be fully understood and better addressed. Efforts to improve female education must involve policies and programs with measurable results.

Education must be more accessible to low-income families and rural populations. Special attention must be paid to the quality of the education provided, and the need for girls to complete their education.

Non-governmental actors and civil society have to make sure that national education development plans and national policy-making are being implemented and that action is taken on the ground.

The United Nations Millennium Development Goals (MDGs), which include goals for improved education, gender equality, and women’s empowerment, should be incorporated into national development plans and the implementation of education policies and programs.

Although progress has proved uneven, Morocco has experienced an increase in female literacy and this is in parallel to a drop in the rate of population growth, with the average Moroccan woman now bearing approximately three children in her lifetime, a figure less than half from 30 years ago, as well as a drop in the average marrying age, now 25-26, up from 17 in earlier decades.

While compulsory education laws and tuition-free primary education have not thus far been sufficient to equalize enrollment rates between men and women in Morocco, educational factors have proven positive with sustainable effects on women’s status and future opportunities.

The implementation of an appropriate social infrastructure to support intellectual, moral, ethical and cultural development along with the current political reform could be a promising context for promoting and increasing the status of the nation’s women, as well as for the society to embrace these changes.