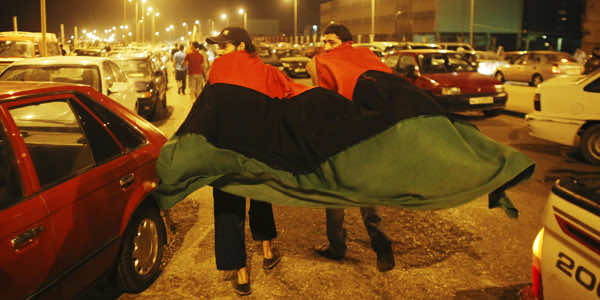 It’s odd, but not necessarily surprising, that critics of the Libya intervention were calling it any number of things: mistake, quagmire, dangerous, an Iraq repeat, and so on. It is odd because the ultimate outcome — the rebels winning and Qaddafi falling — never seemed much in doubt. It was a matter of when, not if. For both better and worse, Libya confirms the reality that the role of external actors (in this case, the United States and Europe) can still be decisive in the Arab struggle for freedom.

We should always tread carefully with counter-factuals. But it is difficult to deny that the alternative to doing something — doing nothing — would almost certainly have led to a bloody, tragic massacre in Benghazi and other pockets of rebel resistance. Libya would have likely been held up as one of the great tragedies of Western neglect or outright subversion, on par with Iran in 1953 or Algeria and Iraq in the early 1990s. When you have the ability to act, doing nothing is no longer a neutral position.

To be sure, this is not a time for settling scores. But it is a time for arguing for the utility, necessity, and morality of a doctrine — the Responsibility to Protect — that seemed, to its opponents, increasingly discredited. Another reality — again, for both better and worse — is that the United States remains something of an “indispensable nation,” a notion increasingly in disrepute. Without American support, however belated, the responsibility to protect would have remained mere rhetoric and posturing. The NATO intervention would not have happened.

That said, we should be careful not to overstate the strategic benefits of President Obama’s chosen course of action the past six months. Foreign Policy‘s Blake Hounshell argues that the administration’s strategy of “leading from behind” now “seems utterly vindicated.” It is unclear why this would be so. If anything, it could be argued, as I did in March, that Obama’s excessive caution made a bad situation even worse. If the U.S. and the international community had intervened sooner — rather than at the very last moment when rebels were making their final stand — Qaddafi would have fallen sooner and without such loss of life and destruction.

This, lest we forget, is how the rebels themselves saw the situation in March. They were literally begging the United States to take action. When their calls were met with silence, Iman Bughaigis, spokeswoman for the rebels, fumed that “[The West] has lost any credibility.” In a veiled but obvious reference to the fence-sitters, she continued, “I am not crying out of weakness … But we will never forget the people who stood with us and the people who betrayed us.”

With the Obama administration dragging its feet, French foreign minister Alain Juppe conceded that it was perhaps too late for military intervention. In other words, what seems like such a success now was then very much in doubt. Even after NATO stepped in, the complaints continued; NATO could do more but wasn’t, rebel officials argued, in part due to U.S. insistence on “letting others lead.” There was also an (understandable) reticence on the part of the Obama administration and its allies to more pro-actively arm and train Libyan rebel forces. But such hesitation, however prudent, came at a cost.

Finally, it is worth nothing that one of the rationales for the Libya intervention — that it would have a powerful demonstration effect across the Arab world — is being vindicated (after being much maligned by Daniel Larison and others critics of the war). In the face of overwhelming repression in Syria and Bahrain and setbacks in Tunisia, Egypt, and Yemen, Arabs needed a victory. There was a growing sense that the euphoria on February 11 — the day Egyptian president Hosni Mubarak stepped down — was rather premature. It was. But, now, all across the region, protesters and revolutionaries are once again emboldened, reminded that the unlikely is still possible. They are warning their own stubborn leaders — Assad in Syria and Saleh in Yemen — that they are next. Today, then, the region’s revolutionaries face their own daunting struggles with more momentum and more hope. That is no small thing. Neither is the newfound freedom of millions of Libyans, who will now have the opportunity, for the first time, to rebuild their shattered nation on their own terms.