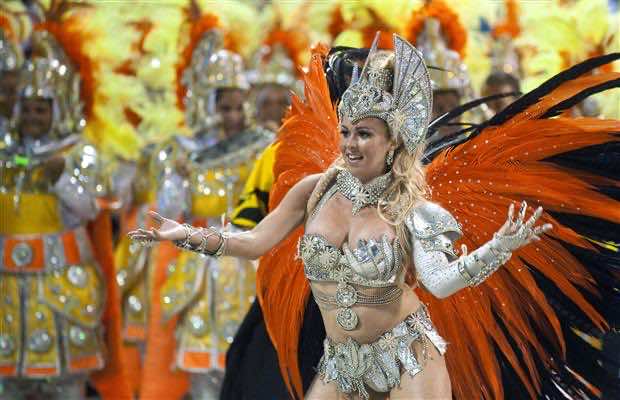 Those are some of the only words Omar knows in Arabic, and he quickly continued his conversation in Portuguese with fellow Muslims who mostly, like him, converted recently to Islam in the world’s biggest Catholic country.

In a land known more for its mini-bikinis and extravagant Carnival featuring scantily clad women, a small but growing number of Brazilians of various backgrounds call themselves Muslim.

For decades, it was primarily families of Libyan, Palestinian and Syrian descent who practiced Islam in Brazil.

Omar, who until just four years ago officiated as Catholic priest at a local church, explained why he embraced Islam.

“I found in Islam everything I had always looked for. I met God as he is, with no adaptation,” the 34-year-old graphic designer told AFP.

Wearing a traditional long djellaba robe, he refused to give his official name, instead only revealing his Muslim one: Omar Israfil Dawud bin Ibrahim.

“At the seminary, you learn that Islam is one of the monotheistic religions. There is no prejudice against this religion,” said Omar as he stood by his wife Alessandra Faria, who goes by the name “Fatima” after converting and deciding to wear the veil.

“In the beginning, my mother was mortified at the thought of going outside with me. I wear the veil to show I am Muslim and aware that I am part of a minority,” she said.

Fatima’s hijab may raise eyebrows in Rio, where it is more common to see women walking the streets in bikinis in seaside neighborhoods, but she says her beliefs can find a place here.

“Brazil is a mix, made up of several different cultures. This mix makes Brazilians very adaptable and tolerant.”

Like most practicing Muslims here, Omar and Fatima are only recent converts to Islam. They plan to travel to Saudi Arabia next year on a Saudi government grant to learn Arabic.

Renovations on the mosque they attend in the suburb of Tijuca north of Rio got under way four years ago with donations from worshippers. It will soon hold up to 400 people during prayers, a major upgrade.

“The number of Muslims continues to grow, and most are Brazilians who are converting. We recruit members mostly online,” said Sami Isbelle, a spokesman for the Beneficent Muslim Society (SBMRJ).

“In Rio, there are about 500 Muslim families, 85 per cent of them Brazilian converts who have no Arab links,” Isbelle said.

Things are different in Sao Paulo state and southern regions of Brazil, where most Muslims were born as such and are often of Arab descent.

Brazil’s census does not count the number of Muslims, and only provides data on Catholics, evangelicals, Jews, spiritualists and followers of Afro-Brazilian religions.

“Muslims are listed in the ‘other’ category, along with Buddhists, for example, said Islam expert Paulo Pinto of Fuminense Federal University, who estimated Brazil is home to about a million Muslims.

The best indicator of the growth of Islam in the country is the rapid increase in the number of places of worship, according to Pinto. There are now 127 mosques, four times as many as there were back in 2000.

After the September 11 attacks in the United States, “there was a growth of interest in Islam, and many people decided to convert,” Pinto added. “Islam was seen as a new form of resistance.”

But it was a “telenovela” or soap opera launched just three weeks after the 2001 attacks, “The Clone,” that sparked some Brazilians’ infatuation with Islam.

Set in Morocco, the popular show showed a “positive imagine of that part of the world, with a benevolent Muslim hero,” said Pinto.

“There is a tendency to think that Brazilian culture, as liberal and sensual as it is, is against the rules of Islam. But in fact, there are many conservative rules that are part of moral and sexual control. Look at how many evangelicals are successful in Brazil!”