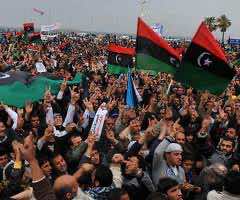 With the end of Colone’ls Qadhafi’s regime looming on the horizon, world leaders and international and regional organizations have begun discussion on the next phase of the Libyan crisis, with calls for the conflict to end with the least possible retribution or further casualties and for all Libyans to focus on national unity, reconciliation and inclusiveness.

The Chairman of the National Transitional Council, Mustafa Abdul Jallil, assured the world that extreme care would be taken to protect people and public institutions and to maintain law and order.

But with many of Colonel Qadhafi’s forces still holding on to the last ditch, sustained violence is still a real possibility in the coming days with serious consequences for civilians.

In anticipation of the imminent fall of the Qadhafi government, the United Nations Secretary-General Ban Ki-moon is getting in touch with the President of the Security Council and the Council’s permanent members. He also plans to hold an urgent meeting towards the end of this week with heads of regional and international organizations, including the African Union, the League of Arab States, the Organization of the Islamic Conference and the European Union and other world leaders.

In the meantime, United Nations Special Envoy, Mr. Abdel Elah Al-Khatib, has been in close contact with the leadership of the NTC and will travel to Doha to meet with the leadership of the NTC . On Mr. Khatib’s next trip to the region, he will be accompanied by Ian Martin, Special Advisor of the UN Secretary-General on Post Conflict Planning, who, according to the UN Secretary-General, has been working for the past several months to ensure that the United Nations is ready to respond to requests Libya may make for post-conflict assistance.

In an encounter with the press today, Mr. Ban confirmed that the United Nations is now prepared to assist in all vital areas, including security and the rule of law; socio-economic recovery; constitution-making and the electoral process; human rights and transitional justice; and coordination of support from Libya’s neighbours and the international community, as well as the delivery of humanitarian assistance to all those in need.