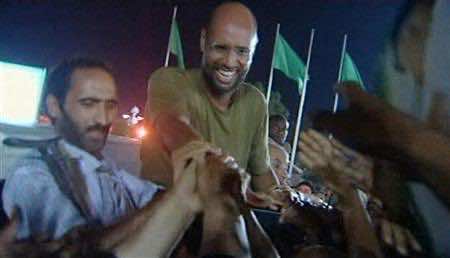 Saif al-Islam, the son of Libyan leader Muammar Gaddafi who rebels and the International Criminal Court said had been arrested, arrived late on Monday at the Tripoli hotel where foreign reporters are staying.

Saif appeared at the Rixos Hotel late at night and spoke to foreign journalists there.

Television footage showed him pumping his fists in the air, smiling, waving and shaking hands with supporters, as well as holding his arms aloft with each hand making the V for victory sign.

Saif told journalists that Tripoli, which has been largely overrun in the past 24 hours by rebel forces seeking to topple his father, was in fact in government hands and that Muammar Gaddafi was safe.

Earlier, armed pro-Gaddafi security mean guarding the hotel took a small group of journalists to Gaddafi’s Bab al Aziziyah compound, where they had a meeting with Saif.

They returned to the hotel accompanied by Saif, who then spoke to journalists in the lobby before taking some of them back to the compound a short distance away for a brief visit.

Saif said: “I am here to disperse the rumours …

“This is a war of technology and electronics to cause chaos and terror in Libya. They also brought in armed gangs by sea and by road.”

He was referring to a text message sent to mobile phone subscribers in Tripoli on Monday congratulating them on the fall of Muammar Gaddafi.

Saif also said that Tripoli was under government control and that he did not care about an arrest warrant issued by the International Criminal Court in The Hague seeking him and his father for crimes against humanity.

When asked if his father was safe and well in Tripoli, Saif told a journalist: “Of course.”