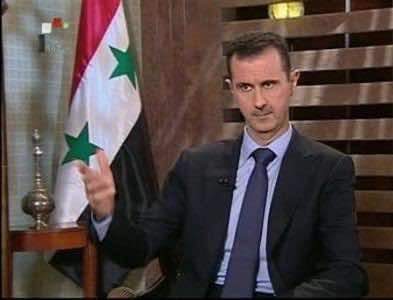 DAMASCUS – Syrian President Bashar al-Assad warned the West against any possible military intervention in Syria, ridiculing calls to quit over the deadly crackdown on the peaceful revolution rocking his regime over the past five months.

“While withholding comment, we tell them that their words are worthless,” Assad said in an interview with state television on Sunday cited by Agence France Presse (AFP).

Assad’s television appearance was his first since June 20, and only his fourth since the start of pro-democracy demonstrations in mid-March.

It followed calls by US President Barack Obama on Thursday for Assad to stand down, a demand quickly echoed by the leaders of Britain, France and Germany and Spain.

The Syrian President said that his forces were achieving success against protesters, promising to sponsor political reforms.

“We have started to register some success on the security front and can say that the situation is now more reassuring,” he said.

“A political solution cannot be put in place if security is not preserved.”

Many opposition figures also rejected his call for a national dialogue, saying there can be no discussion while security forces continue to kill protesters.

Assad also warned the West his nation would not tolerate any outside interference.

“As for the threat of a military action … any action against Syria will have greater consequences (on those who carry it out), greater than they can tolerate,” Assad told Syrian TV.

No country has proposed the kind of action against Syria which NATO forces have carried out in support of Libyan rebels seeking to topple Muammar Gaddafi.

But the West has called on Assad to step down while Washington and the European Union have imposed new sanctions.

The Assad speech came as a UN humanitarian mission began its first full day in Damascus on Sunday to assess aid needs in the wake of the crackdown.

The mission’s objectives were “to see how the UN can support public services and how it can respond to possible humanitarian needs,” such as electricity, drinking water, communications and health, Elisabeth Byrs, spokeswoman of the UN Office for the Coordination of Humanitarian Affairs (OCHA) told Reuters.

The visit comes after 34 anti-regime protesters were killed on Friday by security forces as anti-regime rallies gripped the country after weekly Friday prayers, according to the Britain-based Syrian Observatory for Human Rights.

Facing a brutal military crackdown over the past five months of anti-regime peaceful protests, the United Nations says around 2,000 civilians have died.

Rights groups also say that more than 10,000 people are behind bars in Syria.

Meanwhile, the International Committee of the Red Cross expressed hopes its delegates would soon visit Syrians jailed since the start of the protests.

“There have been discussions with the authorities and we are confident that we will be able to start the visits very soon,” Red Cross spokesman Saleh Dabbakeh told AFP in the Syrian capital without elaborating.

In Geneva, the UN Human Rights Council will hold an emergency meeting on Monday to pressure the Syrian regime to halt attacks and allow an independent probe into alleged violations during its brutal crackdown on anti-government protests.

The council will consider a draft resolution that “deplores the continued indiscriminate attacks on its population” and seek an immediate stop to “all acts of violence,” AFP reported on Monday, August 22.

The resolution also highlights the need to “urgently dispatch an independent international commission of inquiry… to investigate violations of international human rights law in Syria since July 2011.”

The emergency meeting was requested by twenty-four members of the council, including EU states, the United States and all four Arab countries — Jordan, Kuwait, Saudi Arabia and Qatar.

US embassy spokesman David Kennedy said Monday’s council session “comes as part of a much broader effort to use every available tool to confront the Assad regime and empower the Syrian public.

“We hope the special session will further demonstrate the regime’s increasing isolation, strengthen the mandate of the council to report on violations of the human rights of the Syrian people, and help advance a peaceful democratic transition in Syria,” said Kennedy.