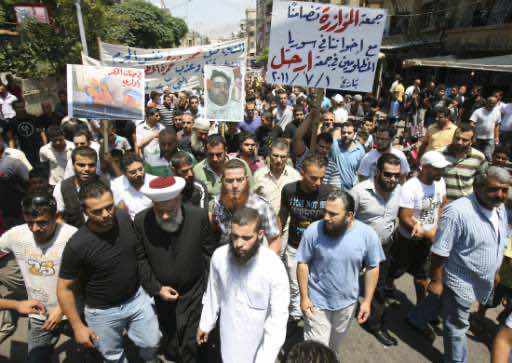 BEIRUT  – Syrian forces shot dead three people in Homs during a visit by a U.N. humanitarian team on Monday, activists said, and the United Nations said the death toll from President Bashar al-Assad’s crackdown on protests had reached 2,200.

The Syrian Observatory for Human Rights said security forces and loyalist gunmen known as “shabbiha” opened fire after hundreds of people took to the streets of Homs to greet the U.N. team, which has been granted access to assess humanitarian needs after five months of protests and repression.

Video footage broadcast on Al Jazeera television showed a crowd of people thronging a car and chanting “The people want the overthrow of the regime” and holding signs saying “SOS” and “We will never give up until we get our freedom.”

U.N. spokesman Farhan Haq told reporters in New York that “a protest situation developed” in Homs during the team’s visit “and the mission was advised to leave for security reasons.”

“The mission did not come under fire,” he added.

Assad stepped up his military campaign to crush dissent during the Muslim holy month of Ramadan, which started on Aug 1, sending the army into large cities including Hama, Deir al-Zor and Latakia.

The escalating bloodshed led Arab states to break months of silence and call for an end to the violence, while the United States and Europe have expanded their sanctions against Syria and called on Assad to step down.

U.N. Secretary General Ban Ki-moon said he was concerned that Assad had not kept a promise he made last week to end military and police operations against demonstrators.

“It’s troubling that he has not kept his words,” Ban told reporters. “I sincerely hope that he heeds … all (the) international community’s appeals and calls.”

“As of today, over 2,200 people have been killed since mass protests began in mid-March, with more than 350 people reportedly killed across Syria since the beginning of Ramadan,” Pillay told the U.N. Human Rights Council.

At an urgent session of the council on Monday, a draft resolution presented by 25 members including Arab nations called for an international commission of inquiry into alleged crimes against humanity.

Assad, speaking to Syrian television on Sunday, said Syria would not bow to external pressure, which he said could only affect “a president made in the United States and a subservient people who get their orders from outside.”

“As for the threat of a military action … any action against Syria will have greater consequences (on those who carry it out), greater than they can tolerate,” he said.

Syria, which borders Israel, Lebanon, Iraq, Turkey and Jordan, has regional influence because of its alliance with Iran and its role in Lebanon, despite ending a 29-year military presence there in 2005. It also has influence in Iraq and supports militant groups Hamas, Islamic Jihad and Hezbollah.

No country has proposed the kind of action against Syria which NATO forces have carried out in support of Libyan rebels seeking to topple Muammar Gaddafi. But Gaddafi’s apparent collapse in Libya will give fresh heart to Assad’s opponents.

“As for the security situation (it) has become more militant in the recent weeks,” Assad said. “We are capable of dealing with it … I am not worried.”

Assad also said he expected a parliamentary election to be held in February after a series of reforms that would let political groups other than his Baath party take part.

The opposition has dismissed Assad’s promised political reforms and many opposition figures have rejected his call for a national dialogue, saying there can be no discussion while security forces continue to kill protesters.

Syria has expelled most independent media since the unrest began, making it difficult to verify events on the ground

Seeking to unify their fragmented movement, opposition figures have gathered in Turkey to nominate a broad-based council to support the uprising.

Similar initiatives in the past have failed to produce a robust umbrella group to unite the opposition, fragmented by 41 years of autocratic rule by Assad and his father.

Assad’s government has blamed armed groups for the violence and has said more than 500 soldiers and police have been killed since the unrest erupted in March.

State news agency SANA said 17 members of Syria’s security forces were buried on Saturday and Sunday, some of them killed by gunmen in Homs and the southern province of Deraa.