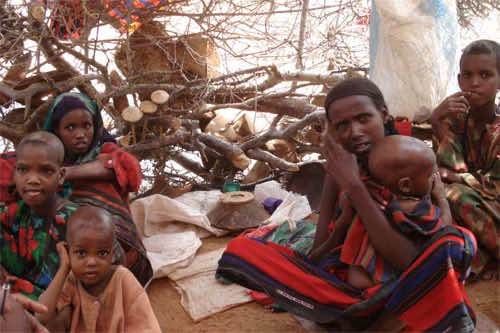 The United Nations has deployed an emergency team to south-eastern Ethiopia where 18,000 new refugees fleeing drought, famine and conflict in Somalia have recently poured in, compounding a situation already fraught with high mortality from malnutrition and measles.

“A priority for us remains the need to save lives among this badly weakened population,” UN High Commissioner for Refugees (UNHCR) spokesperson Adrian Edwards told a news briefing in Geneva on the latest chapter in the crisis wracking the Horn of Africa, where more than 12 million people in Kenya, Ethiopia, Djibouti and particularly Somalia are in urgent need of help and tens of thousands, many of them children, have already starved to death.

“Ensuring that new arrivals get food, water and medical attention is critically important,” he said, noting that the UNHCR emergency team had been sent to the Gode area, 250 kilometres north of the refugee camps already been set up in Dollo Ado. “Our team includes experts in health, nutrition, protection, field coordination, and registration.”

Last week UN Children’s Fund (UNICEF) Executive Director Anthony Lake warned that some 390,000 Somali children in the region were suffering from malnutrition, with nearly 140,000 of them “facing imminent death” from severe acute malnutrition.

UNHCR will airlift aid for up to 20,000 people in Gode from its stocks in Dubai, including blankets, plastic sheeting, jerry cans, kitchen sets, sleeping mats, buckets and mosquito nets. Some 3,000 tents, supplied locally, are also being rushed in. Non-governmental organizations (NGOs) with field presences in the area are already helping with health needs, nutrition and water, and UNHCR will provide additional support where necessary.

Mr. Edwards voiced continuing concern at the persistently high mortality rate at the 25,000-strong Kobe camp in Dollo Ado, where a major cause of death is suspected measles, compounded by the high prevalence of acute malnutrition and poor hygiene practices.

A mass immunization campaign was conducted last week for children between the ages of six months and 15 years, but it will take 10 to 14 days for the vaccine to be effective and for the mortality rates to become lower. Together with the UN Children’s Fund (UNICEF), UNHCR has just completed a second mass anti-measles campaign in the Melkadida camp. Polio vaccination and screening for malnutrition were carried out at the same time for children.

In Somalia, shelter materials and other aid items continue to be distributed in Mogadishu, the capital, and southern areas, but these still fall short of the many needs in makeshift settlements in southern and central Somalia that accommodate many of the country’s estimated 1.4 million internally displaced people (IDPs). In addition to shelter, people also need food, access to clean water and medical facilities.

“Displaced Somalis tell our staff that the current weather conditions of scorching sun, strong winds and intermittent heavy rains are difficult to endure, despite plastic sheets having been provided for shelter,” Mr. Edwards said, noting that a further 20,000 emergency assistance packages from Dubai are due to reach Mogadishu on 10 September for distribution across southern Somalia.

In Kenya, where the Dadaab camp complex currently hosts some 440,000 refugees, 1,200 Somalis are still arriving every day and new sites are being opened up.