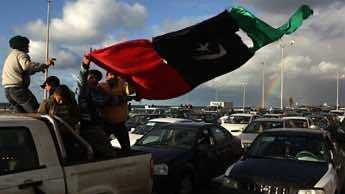 France and its partners at the United Nations are working on a draft resolution aimed at unfreezing Libyan assets and unlocking sanctions, a French diplomatic source said on Wednesday.

The resolution is still in the preliminary stages and will be worked out in the next few days during talks in Qatar,Turkey and New York, the source said, without giving a timeframe.

“It is difficult to be precise on the details of the resolution,” he said, adding that it would look at the issue of sanctions and frozen assets now that rebel forces appear to be on the brink of ousting Muammar Gaddafi.

The foreign ministry did not refer specifically to a new resolution, but spokesman Bernard Valero said the Libyan National Transitional Council (NTC) must be handed control of its country’s resources.

“The NTC must have the financial resources that were frozen by the U.N. Security Council resolutions,” he said.

French President Nicolas Sarkozy was due to meet Libyan rebel leader Mahmoud Jibril in Paris later in the day to discuss prospects for a political transition. They will hold a news conference afterwards.

Sarkozy has also called a “Friends of Libya” conference to be held in Paris next week which could bring together as many as 30 foreign leaders and international organisations to help with reconstruction and the transition to democracy.

“France wants to unite all the friends of Libya, in other words all the countries that have supported democratic forces in Libya, to help with the reconstruction of Libya and peace,” government spokeswoman Valerie Pecresse told a briefing.

Sarkozy took a gamble a year before a 2012 presidential election by becoming the first foreign leader to back the rebels and by spearheading the West’s military intervention.

With Gaddafi now chased out of his Tripoli strong hold, France is keen to keep up the diplomatic initiative it has taken with the Libyan crisis following its hesitant reactions to uprisings inTunisia and Egypt in late 2010.

Jibril heads the NTC’s executive committee and is referred to as Libya’s prime minister.