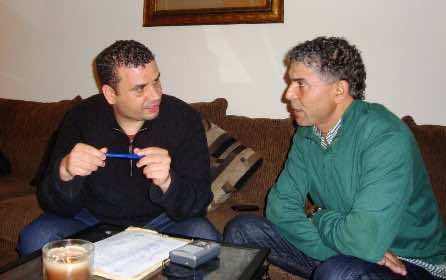 Moroccan Chaabi (Popular) Music is arguably the most popular music genre in Morocco.   It is as deeply rooted in the Moroccan culture as rock ‘n Roll is in its American counterpart.  It is very easy to appreciate what Chaabi music is to Moroccans once one realizes that they used it as a weapon in fighting French colonization of Morocco in the early half of the 20th century.  For instances, when Mohammed V, King of Morocco at the time, was exiled to Madagascar and then Corsica, Chaabi songs demanding his return became national anthems.

Legends and pioneers of this music genre include Haja AlHamdawiya, AbdelAziz Stati, and Zahra AlFassiya, a Moroccan Jewish artist.  Chaabi transcended both religion and gender.

During a recent visit to the states on a tour, I had the pleasure of catching up with AbdelAziz Stati, one of the most prolific singer-song writers of the genre of all time.  Stati is a nickname he earned due to his hexadactylism.  Here is our conversation:

Jamal Laoudi: Thank you Mr. Stati for taking the time to entertain these questions and welcome to Washington DC:

Abdelaziz Stati: Thank you Jamal for having me and I appreciate this opportunity.  This is not my first time in the states. I had been here back in 1996 when I toured many cities.  It was great experience and I was happy to interact with my fans who I salute.

What is the purpose of this visit?

I am here on a tour.  I had been meaning to make this trip for a while now in order to see my fans in the US, and spend some time with them.

Your career spans about three decades.  Compare and contrast Chaabi music then and now:

It has evolved no doubt.  I think I managed to stick around because I am able to adjust and keep up with these evolutions.  Back then we had Al3ayta Almarssawiya that we used to learn and hone our craft.  Today, things are different including the audience. I try to adjust to new fans. That is partly why much research goes into my work from crafting meaningful lyrics to addressing relevant topics; I think this is what has allowed me to stay afloat as an artist.

How early did you learn to play the violin?

I have been playing the violin since I was 14 and overtime, I learned to play other instruments as well.  As for singing, I have been doing so for as long as I remember including in Tamazight which I am very proud of.  I understand that there are no limits in the arts.

Speaking of songs, how do you choose lyrics and topics you are going to sing about?

I have always looked for meaningful topics and lyrics.  My songs deal with various topics from immigration to betrayal to respect of parents.  Relevance is important to me in my work. I am lucky I can compose music, write song lyrics, and sing as well but to I cannot do all these things if I want to keep up.  I am lucky I work with many great lyricists and all I have to do is propose a topic and they come up with text.  I am comfortable with that since I know the greatest of the artists do the same.  That being said, I have the final say on what goes where and how.

When releasing an album, are you able to reliably predict what track would be more successful than the others?

I spent lots of time and effort in all my tracks and I expect them all to do well.  That being said, when I release an album, the public has the final say naturally.

You have performed in countless concerts and in many countries.  Is there an event that occurred during a performance that stands out? May be a funny incident or a memorable moment of some sort:

Sure, countless situations of various shades and colors.  I am grateful that my fans have always supported. I and I will just leave at that.

When you are at home relaxing, what music do you like to listen to?

I listen to all kinds of styles from all over the world.  I like the genre that takes me into a psychedelic trance.  I am happiest when I lose myself in listening to music, playing my violin, or engaging my audience in a concert.

Speaking of a psychedelic trances, when playing the violin, you have the reputation of tilting your head down towards it.  Why do you do that?

Well, when I first started out, many have told me but I denied it initially.  But when I looked at a video tape of a performance, I was surprised how deep in it I get.  During those moments, I don’t like for anyone to even touch me.  Doing so at that moment is tantamount to waking me up violently from sleep and the likes.  I am in a zone at that time.  It is so intense that I would not recall much of the events the following day.

I am working on album to be released very soon. I know I have not had anything new for the past six years or so but that is due to the piracy problem that plagues the Moroccan music market.  We, as artists, spend lots of time and effort and even our own money only to come up empty.  It is a huge problem that needs to be dealt with because it discourages many especially those with limited financial means.  If piracy is addressed, I promise my fans that I will have a new album every six months.

What comes to mind when you hear:

– Um Kaltoum:  a phenom. She is highly respected by the who’s who in the Arabic music and beyond, rightly so.

– Khaled:  ya salam; I am one of his fans.  He is a big star with incredible vocals.  I have never heard anyone do Rai music like he does. There are other great ones of course like the late Cheb Hasni, may he rest in peace, and Cheb Mami but I cannot compare them to khaled.  He is unique.

–  Abdelaziz Stati: a modest man who strives to learn as an artist as if he is just starting out.

I want to thank you very much for this opportunity and for giving me a platform to engage my fans.  I want to also thank Mr. Hichan El Anmari for hosting this interview among other things.  Hicham is a great artist in his own right.   I want to address one more thing; While in Orlando, I found out that there was a March in support of the Moroccan Sahara in Washington DC.  I wish I had known that before.  I would have made sure I was there, in the front row with my Moroccan flag.  It is an issue dear to all of us Moroccans.  I have a song called “Maghrini wa Fhal” (Moroccan to the Bone) which I performed in all my events during this tour.

Once again, many thanks Jamal.

*Jamal Laoudi is a contributor to Morocco World News