Morocco World News
Home Highlights on Morocco Libya: Over 556 of the Polisario mercenaries in the hands of NTC

Some 556 of the Polisario mercenaries, involved in helping Gaddafi quell the rebellion were arrested by soldiers from the Libyan National Transitional Council (NTC), according to a source of the NTC, quoted by the website "geotribune.com". 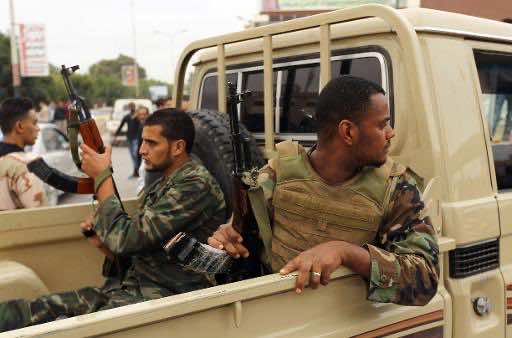 New York – Many of these mercenaries were arrested in the city of Zawiya, but also in the military complex of  Bab El Aziziah, the  source added, noting that the NTC ordered their transfer to Benghazi while trying to arrest remaining elements of the Polisario located in Libya.

According to the same source, the decision of the NTC was taken following the August 22 attack by insurgents against the Embassy of Algeria in Tripoli.

Once in the premises of the Algerian Embassy, “the anti-Gaddafi fighters have found incriminating documents for Algiers, revealing a massive support to Gaddafi”, the same source added.

“The records have confirmed what was known in part: an Algerian military and logistical support to Gaddafi, in addition to the presence on Libyan soil of hundreds of the Polisario mercenaries”.

According to the same source, the NTC has concluded that, in addition to the 556 elements  arrested, others Polisario mercenaries were killed in the fighting or would have vanished into the wild in the wake of the confusion that followed the collapse of the regime. “

“The NTC gave orders to continue to hunt down survivors in order to arrest them and bring them to justice”, added the same source.

Since the beginning of the Libyan uprising back in February 17th, The presence of the Polisario mercenaries with Gaddafi has resulted in tension between the NTC and Algiers.

Many news reports have accused Algeria of sending the Polisario to Tripoli in order to help Gaddafi quell the uprising and save his regime. “

Last March, Ali Richi, former Libyan Minister for Migration, had denounced the presence of the Polisario mercenaries with the Gaddafi troops. Mr. Ali  asserted that the Polisario dispatched its mercenaries in order to help Qaddafi to suppress and kill his opponents. Mr. Errishi went on to condemn the Polisario members for their “hypocrisy in claiming to fight for freedom and progressive ideal, while joining the mercenary army that Qaddafi has paid to attack Libyan protesters and cling to power”.

The Alliance between the Polisario, Algeria and Gaddafi

In fact the Polisario junta has every reason to take side with Gaddafi, its main backer and the first “leader” to shower it with financial support even before Algeria starting doing so. .

Since the beginning of the Sahara conflict, Qaddafi has always backed the Polisario Front. He first helped the separatist movement to create fully-fledged armed forces. During the war that pitted the latter against Morocco between 1979 and 1991, Qaddafi generously provided funds and training to the Polisario Front.

Hence the main reason that prompted late King Hassan II to sign the Treaty of the short-lived Union between Morocco and Libya on 13 August 1984 was to neutralize Qaddafi and deprive the Polisario Front of one of its main supporters. It is true that Qaddafi pledged to withdraw its support to the Polisario after the signing of this Treaty. That being said, based on his lunatic and unpredictable nature and his ideological leaning, one can assume that he kept lending a helping hand to the Polisario thereafter knowing that he had never been supportive of Morocco on the issue of the Sahara.

In an interview with TV channel France 24 in July 2010, he stated “there is no alternative to the referendum in Western Sahara and those who oppose it will pay the price”. Moreover, on the occasion of the Arab League Summit held in Seirt, Libya, in March 2010, Qaddafi received lavishly the leader of the Polisario. This diplomatic move angered Morocco and raised question about the real intentions of the Libyan “leader”.

The Algerian military Junta has also every reason to help Qaddafi’s save his regime, as the Algerian leadership has always seen in Qaddafi its main ally in preventing Morocco from achieving its territorial integrity and putting an end to this territorial conflict (the Sahara) that prevents the peoples of the Maghreb from building a brighter future.

Many news reports have pointed out to the implication of Algeria in helping Qaddafi quash the rebellion. In March, the Times of London reported that “a convoy of some 40 vehicles was waiting to take a group of some 200-300 young Tuaregs from Mali to Algeria, then a two-day drive to Libya. Other Tuareg from Niger and southern Algeria are also reported to be going to Libya to join Qaddafi loyalists”.

A week before, the Germany-based Algerian human rights group “Algeria Watch” released a statement in which it accuses the Algerian government of helping the Qaddafi regime oppress the Libyan people:

“It is with both sadness and anger that we have learned that the Algerian government  has sent armed detachments to Libya to commit crimes against our Libyan brothers and sisters who have risen up against the bloody and corrupt regime of Muammar Gaddafi. These armed detachments were first identified in western Libya in the city of Zaouia where some among them have been arrested. This has been reported in the media and confirmed by eye witnesses”.

Most people in the region are convinced that an end of the Sahara conflict would pave the way to a real regional integration in the Maghreb, which would, consequently, bring considerable advantages in terms of growth and improvement of the population’s living conditions in the whole Maghreb region.

More often, when some civil society actors and analysts report about the Polisario, they portray it and its leaders as forward-looking and democracy-prone movement. But they never question the fact that the leader of the Polisario, Mohamed Abdelaziz, is the same person who is ruling over this movement in an iron-fisted manner since 1976. They never point out that this so-called sole representative of the will of the Saharawi people has always been adamant in stifling the voices of all those, in the Tindouf camps, who question his legitimacy as representative of all the Saharawis or call for the adoption of a new approach in order to find a solution to the Sahara conflict.

In this regard, the case of former Polisario’s police chief, Mustapha Salma Ouled Sidi Mouloud is very telling. In April 2010, Mustapha Salma visited the southern city of Smara for the first time in 30 years, and declared that the Autonomy Plan presented by Morocco in 2007 is “the ideal solution” to the conflict of the Sahara. This pronouncement in favor of Morocco’s Autonomy Plan angered the leaders of the Polisario.

On his way to the Tindouf camps, on September 21, 2010, he was kidnapped by the Polisario militia and imprisoned in the desert for 71 days. Ever since, he has been trying to return to the camps to join his family but is still being denied access.

The coming weeks and months may bring more information about the implication of the Polisario in quelling the Libyan revolution.