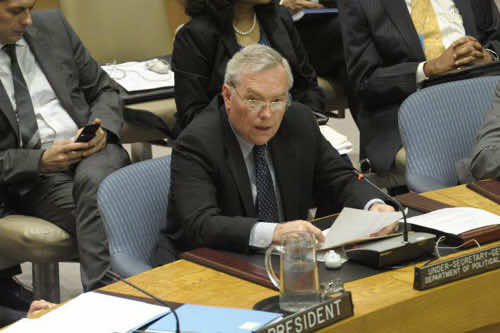 The recent serious escalation of violence in southern Israel and the Gaza Strip makes it ever more urgent to break the deadlock in the Middle East peace talks, the top United Nations political official warned today.

“Ending the Israeli-Palestinian conflict and establishing an independent and viable State of Palestine living side by side with Israel in peace and security are long overdue,” Under-Secretary-General for Political Affairs B. Lynn Pascoe told the Security Council, referring to the internationally sponsored Road Map peace plan.

“In a rapidly changing regional context, serious progress towards this goal is urgent,” he said in the monthly report of the conflict, noting that although the September deadline set a year ago for resolving all the core issues was at hand, differences between the two sides remained profound and mistrust was increasing.

As a “stark reminder of the fragility of the situation,” Mr. Pascoe cited: the recent terrorist attack near the port of Eilat in which eight Israelis died and five Egyptians were subsequently killed; air strikes on Gaza that killed 19 people, including three civilians, and wounded 30, after Israel attributed the Eilat attack to a Palestinian group based there; and indiscriminate firing of more than 100 rockets and projectiles by Gaza militants that killed an Israeli civilian and wounded 27.

“The status quo is unsustainable and damaging to both sides,” he said, noting that the UN Special Coordinator for the Middle East Peace Process, Robert Serry, was actively engaged in Egyptian efforts to restore the calm out of Gaza that had prevailed since April.

In a statement today, Mr. Serry voiced “deep concern” that this calm was at risk due continuing incidents and deplored the loss of civilian life. “A complete halt to the firing of rockets from Gaza and a display of maximum restraint by Israel are required,” he said in a statement, calling on both sides to take immediate steps to prevent any further “serious escalation of violence.”

Mr. Pascoe called the militants’ “indiscriminate” firing of rockets towards civilian areas unacceptable, and voiced “serious concern” at expanded Israeli settlement activity on land captured in the 1967 Six-Day war, including 5,200 new housing units in occupied East Jerusalem, which the UN says is contrary to international law.

The Palestinians have refused to resume negotiations with Israel unless there is a complete halt to settlement building on the occupied land that they want for their future State, with East Jerusalem as its capital, and intend to ask the UN General Assembly and Security Council next month to recognize such a State and grant it full UN membership, a move Israel opposes.

“We continue to hope that the international community will be able to shape a legitimate and balanced way to help the parties resume meaningful negotiations that will realize the two-State solution,” Mr. Pascoe said.

He noted that the Palestinian Authority (PA) was successfully laying the foundations for a State on the occupied West Bank, with tangible economic and security improvements, and called on donors to provide “timely and generous support” for the additional $250 million that the PA needs immediately to meet its commitments.

On Gaza, controlled by Hamas which denies Israel’s right to exist, Mr. Pascoe said imports had increased by 12 per cent in the past month – “a step in the right direction” – but he called for a comprehensive easing of Israel’s closure, which it relaxed last year.

“Improving living conditions of the Gaza Strip remains a priority for the United Nations,” he added.

Turning to Lebanon, Mr. Pascoe said Israeli violations of the country’s air space continue on an almost daily basis and in high numbers, although the situation remained “generally quiet and stable” in the southern region, where an expanded UN peacekeeping force has been monitoring a ceasefire since the month-long war between Israel and Hizbollah militants in 2006.

On Syria, where UN human rights officials say the Government’s violent crackdown on its own people during months of protests may amount to crimes against humanity, he reiterated concerns that President Bashar al-Assad had not kept his word to engage in meaningful reforms.