New York - Arab countries will be invited to the International Conference of “the friends of Libya”, scheduled for September 1st in Paris, at the initiative of France and the UK, announced on Thursday the French Ministry of Foreign Affairs. 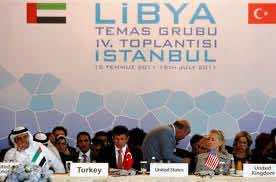 By
Adnane Bennis
-
Adnane Bennis is a national of Morocco, obtained his Bachelor’s Degree in Computer and Information Science from East west University in Chicago.
Aug 25, 2011
Spread the love

New York – Arab countries will be invited to the International Conference of “the friends of Libya”, scheduled for September 1st in Paris, at the initiative of France and the UK, announced on Thursday the French Ministry of Foreign Affairs.

“France and the UK invite, at the highest level, Arab countries directly affected by the previous phase but also those wishing to participate in the reconstruction of Libya,” said the spokesman for the French Ministry of foreign Affairs, Bernard Valero, during his daily briefing.

He believes that countries neighboring Libya “will have a major role to play to support the new Libya in its transition.”

“That is why they will be invited to the September 1st conference, which will allow them to show their solidarity with the post-Gaddafi Libya,” he said.

Following a meeting with the Prime Minister of the National Transitional Council (NTC) of Libya, Mahmoud Jibril, French President Nicolas Sarkozy announced on Wednesday evening, the convening of this conference which aims to “prepare the post-Qaddafi “and goes” well beyond the Contact Group. “

China, Russia, Brazil and India are also among the countries invited to the Paris Conference. The Secretary General of the United Nations, Ban Ki-moon will also take part at the Conference.

Created in London on March 29th , the Contact Group on Libya includes thirty countries and several international organizations including the UN, the European Union and the Arab League.

Prior to the Paris Conference, members of the Contact Group on Libya have already met four times in Qatar, Italy, United Arab Emirates and Turkey.

At a meeting in Istanbul, Turkey, Members of the Contact Group on Libya on Thursday called upon the UN to release Libyan assets for the National Transitional Council (CNT), announced the spokesman for the U.S. State Department Victoria Nuland.