TRIPOLI,  Aug 25, 2011 (Reuters)More than 30 men believed to be fighters loyal to Muammar Gaddafi have been killed at a military encampment in central Tripoli and at least two were bound with plastic handcuffs, indicating they had been executed. 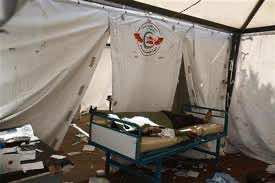 More than 30 men believed to be fighters loyal to Muammar Gaddafi have been killed at a military encampment in central Tripoli and at least two were bound with plastic handcuffs, indicating they had been executed.

A Reuters correspondent on Thursday counted 30 bodies riddled with bullets in an area of the Libyan capital where there had been fighting between Gaddafi forces and rebels.

Five of the dead were at a field hospital nearby, with one in an ambulance strapped to a gurney with an intravenous drip in his arm.

The encampment was strewn with Gaddafi paraphernalia – caps and pictures of the Libyan leader – and Gaddafi green flags flew nearby.

Some of the dead wore military uniforms while others wore civilian clothes. Some were African men. Gaddafi is known to have recruited soldiers from neighbouring countries.

Two of the bodies were charred beyond recognition.

The incident took place at a traffic circle in an area of Tripoli that had been held by forces loyal to Gaddafi.

The encampment was littered with abandoned food, weapons boxes and wrecked vehicles. Blankets had been placed over the dead.

Elsewhere in the city, a British medical worker said a hospital had received the bodies of 17 civilians believed to have been executed in recent days by government forces.

“Yesterday a truck arrived at the hospital with 17 dead bodies,” Kirsty Campbell of the International Medical Corps told Reuters at Mitiga hospital.

“These guys were rounded up 10 days ago. They were found in Bab al-Aziziya when the guys (rebel fighters) went in. These guys were shot in an execution there,” she said.

The wounds were not battlefield injuries, she said.

She said there had been reports of more bodies, but added: “I myself counted 17 last night.”

“It is hard for us to confirm anything at this point, but incidents such as these will be looked into by the Commission of Inquiry on Libya which issued its first report in June and is still functioning,” he told Reuters.

“We urge all those in positions of authority in Libya, including field commanders, to take active steps to ensure that no crimes, or acts of revenge, are committed.”

Libya’s ambassador in Geneva, Ibrahim Al-Dredi, told Reuters he did not believe the rebels had carried out executions and anyone responsible should be put on trial.

“The leadership of the NTC is asking those fighters not to kill anybody, not to harm anybody, unless it’s a combat situation,” he said. “I don’t think they will kill prisoners.”

One man at the Mitiga hospital had both arms and one leg bandaged. Doctors said he was one of the survivors.

Usama al-Hadi Mansur, 36, a clerk, said he had been arrested some days before and was in a cell with 23 other men at the Gharour prison, on the edge of the Bab al-Aziziya compound.

He said that on Tuesday, as the rebels entered the capital, the prison guards ordered all the inmates to lie on the ground and opened fire on them. He said he was hit. “Allah gave me a chance to survive.”

He said that he lay on the ground for several minutes and heard the sound of breathing coming from the one other man in the cell who had survived. He said he and the other survivor then waited several hours before the rebels arrived and released them.

Doctors showed Reuters 15 dead bodies in the yard behind the Mitiga hospital. They were riddled with bullets, and were bloated, indicated they had been left in the heat for some time.

One of the doctors at the hospital, Hizar Ali, said the prison guards had thrown an explosive device into the prison cell before opening fire, but the survivor who spoke to Reuters did not confirm this.

Amnesty International said on Thursday a delegation it had sent to Libya received reports of abuses by both sides in the conflict, including of rebels detaining and beating black African migrants suspected of being mercenaries.

Rebels are suspicious of people from sub-Saharan Africa because some have fought on the side of Gaddafi’s forces.