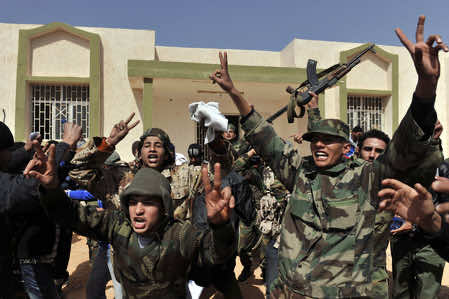 “At around midnight, a formation of Tornado GR4s … fired a salvo of Storm Shadow precision guided missiles against a large headquarters bunker in Sirte,” it added in a statement.

The Tornadoes took off from RAF Marham in Norfolk, eastern England, it added.

“It’s not a question of finding Gaddafi, it’s ensuring the regime does not have the capability to continue waging war against its own people,” he told the BBC.

“The attack that we launched on the bunker in Sirte last night was to make sure that there was no alternative command and control should the regime try to leave Tripoli.”

British jets also destroyed a command and control node that remained in former regime hands on the road south from Tripoli to the International Airport, it added.