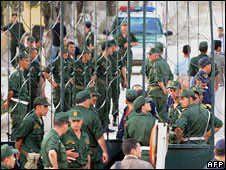 It was not immediately clear whether there were casualties. The bombers detonated themselves at the entrance not long after “iftar” — the moment when Muslims observing the holy month of Ramadan break their daily fast, the source said.

Algeria, an energy exporter in North Africa, is still emerging from nearly two decades of conflict between security forces and Islamist militant groups that, at their peak in the 1990s, killed an estimated 200,000 people.