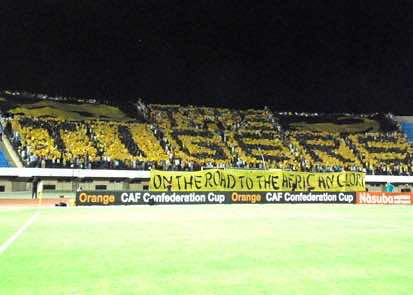 Two weeks ago in far away Morocco, Sunshine Stars were beaten 1-0 by the North African side who currently stand atop of Group B table on seven points against their hosts’ six.

Itodo whose experience in the middle has been the stabilizing force on the title chasing Sunshine told SuperSport.com that MAS will fall in Ijebu Ode on Saturday.

“We are going out for nothing short of outright victory, we lost 1-0 to them in Morocco, and Saturday will be our turn to pay them back in their own coin.

“They are strong side, but there is no way they will escape thorough beating.

“We had a meeting with our coach this morning (Friday) where he told us the importance of the match; we want to win to re-gain the top spot.”

The Nigerian ‘B’ international midfielder whose immense input assisted Enyimba to win the domestic league title last season hinted that his teammates are in high spirit ahead of the clash against MAS.

“The spirit is high among my teammates, revenge appears to be their watchword at the moment.They want to pay back MAS in their own coin.”

Itodo equally promised to add his name on the scorer’s sheet.

“Of course, I will like to score and add my goal to the goals that will nail MAS. In fact, I am dreaming of it,” he said.