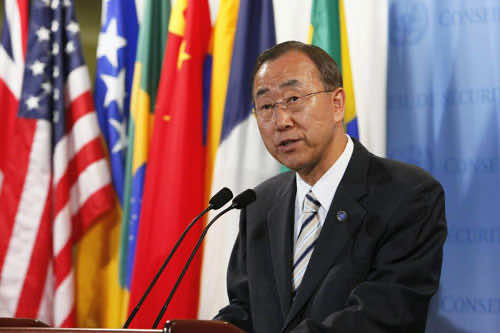 He said the Security Council, which makes the decisions on such matters, had assured him of their support for the rapid deployment of a UN mission in Libya, adding that its decision yesterday to release to the authorities Transitional National Council (TNC) $1.5 billion in Qadhafi regime assets that it had frozen under sanctions a welcome step.

“At this moment of great transition, we must come together with an effective, well-coordinated programme of international action,” he told the heads of the African Union (AU), Arab League, the Organisation of Islamic Cooperation (OIC) and the European Union in a video conference from UN Headquarters in New York. “All of us now must work together and respond rapidly to requests from the Libyan transitional authorities for assistance.”

He noted that his Special Adviser for Post-Conflict Planning Ian Martin and his Special Envoy for Libya Abdel-Elah Al-Khatib met with National Transitional Council (NTC) leaders in Doha, Qatar, on Wednesday to discuss needs after the deadly fighting in which Mr. Qadhafi’s opponents have taken control of much of the country, including most of Tripoli, the capital.

“As do other international leaders we have consulted in recent days, they expect the United Nations to play an ‘essential, pivotal role’ in the country’s future,” he said. “In addition to immediate humanitarian assistance, particularly as it relates to medical help, they placed special emphasis on early support for elections, transitional justice and policing, as well as longer-term assistance in socio-economic recovery, rule of law and institution-building.”

While there is growing recognition that the crisis in Libya has entered a final and decisive phase, enormous challenges remain to be met as fighting continues in many parts of the country, including Tripoli, Sirte and Sabha.

“Lives continue to be lost. The destruction of property and livelihoods has been tragically heavy,” he said. “There are widespread shortages of fuel, food and medical supplies, particularly in the Nafusa Mountains and Tripoli. Reports on the ground suggest that the water supply to the capital and surrounding region may be in danger, putting approximately three million people, or more, at risk.”

After the video conference Mr. Ban told reporters all participants agreed that the international community must come together with an effective, well-coordinated programme of action, with the UN playing “an essential coordinating role,” although it is up to the Libyan people to determine their future.

Meanwhile, Deputy Secretary-General Asha-Rose Migiro told the AU Peace and Security Council in Addis Ababa, Ethiopia, that the UN sees the AU as a key partner in helping Libya to rebuild. “When the United Nations and the African Union work together, we succeed,” she said.

She noted that there had been differences between the AU and other nations and regional organizations on the Libyan crisis, with some African States reportedly opposing the UN-backed bombing campaign by the North Atlantic Treaty Organization (NATO) to protect civilians from Mr. Qadhafi’s forces. “Now is the moment, however, to look to the future,” she said.

“Together, we must encourage the new leadership to undertake every effort to protect civilians and public institutions, to maintain law and order, and to promote national reconciliation and unity,” she added, calling for the establishment of a government that can deliver on its people’s hopes.